There’s no question the work is superior.

The afternoon sun pouring in through the large windows across the back of the house reveal the tidy craftsmanship, show off the wooden beams and the gleaming floors, reflect in the wide expanse of kitchen counter and brick backsplash.  It’s so beautiful you begin to believe that yes, a house like this would cure all of your problems.

Anson Ropp and his wife Derenda lean against the kitchen counters in the home their business, Ropp Builders, has almost officially completed for their client. It’s a dream home, for certain, but it’s also simple in its elegance and classic in its beauty and the personality of the homeowner is evident and brought to lovely life through the skills of master craftsman Anson Ropp. 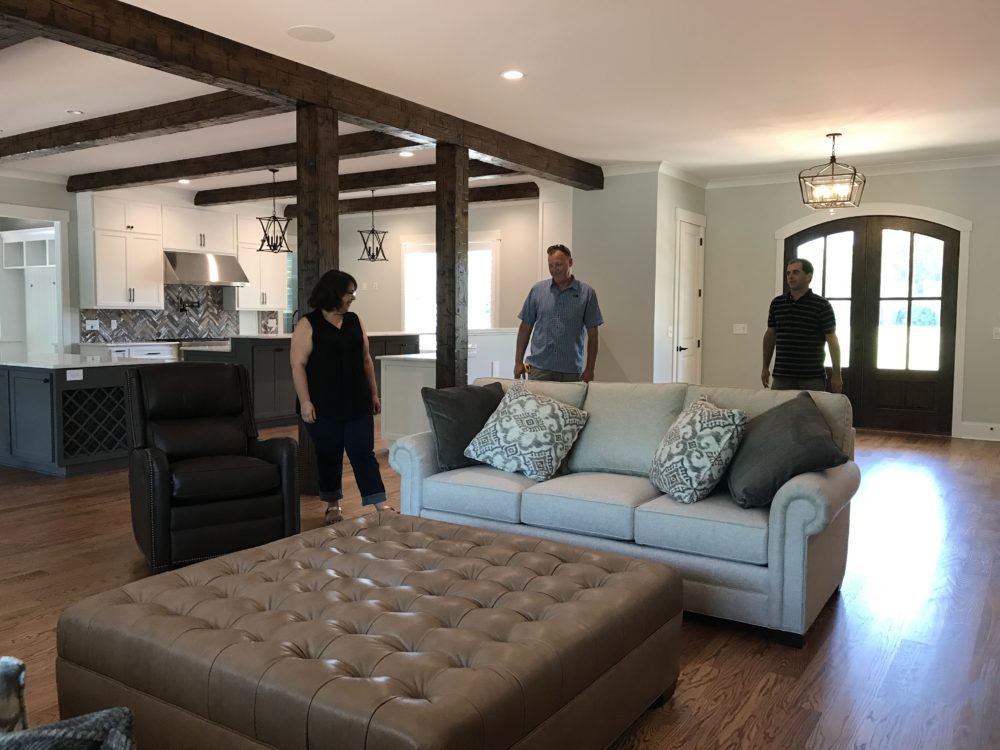 Although Anson and his wife began this business in 2004 locally, building and construction have been a lifestyle for Anson for more than twenty-five years.

Growing up in Michigan, Anson worked with his father in the construction business and continued doing that when his family moved to Pickens County before Anson began high school.  Derenda and Anson met at college in Pennsylvania and now the entrepreneurial couple have four children and live in Travelers Rest.

Ropp Builders builds custom homes, like the one I was touring through this interview, but they also offer home inspections as well. 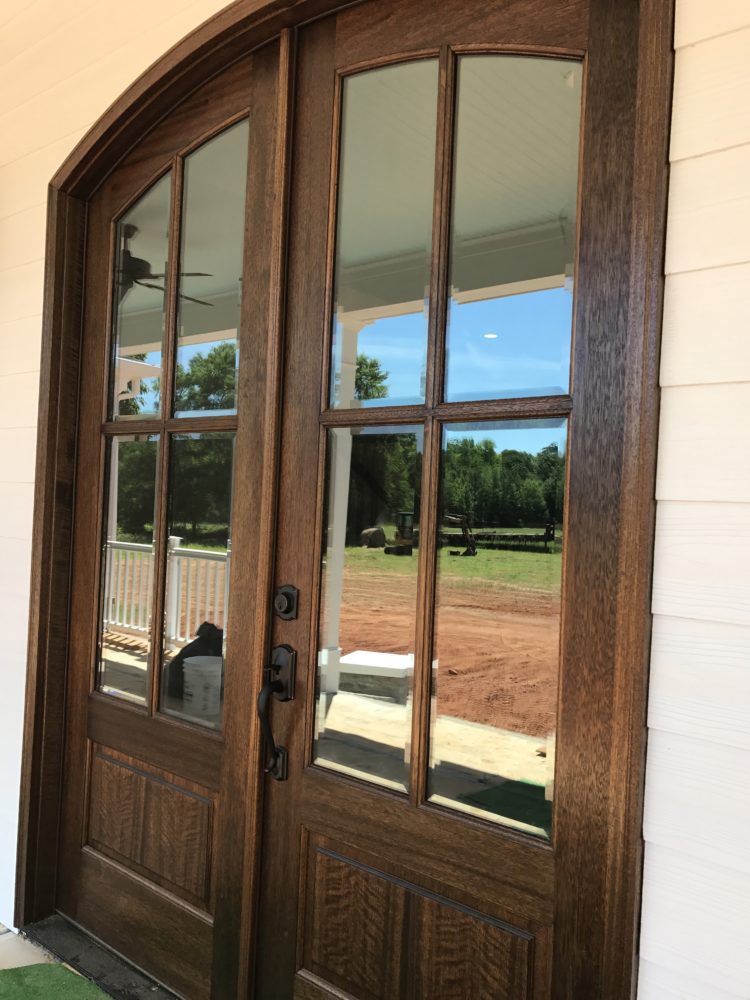 When Ropp Builders begins a project Anson will hire subcontractors he trusts and can feel confident in their skill set.  Anson himself will serve as the site supervisor while also completing particular projects per building site.

“I like the project of taking someone’s idea.   I build it on paper and in my head and then I get to see it come to life and make it happen,” Anson says.

Derenda pulls her weight on the team through marketing and scheduling.  And vision casting sometimes too.

“There’s something very satisfying and fulfilling about somebody coming with a dream – about someone saying, this is something we want to do.  Can you make it happen?   And then figuring out a way to make that happen.  Especially things like figuring out how to incorporate an old mantle, or family heirloom pieces and working with what they find important,” Derenda says.   For example, the home we are standing in today was absolutely envisioning a southern farmhouse.  And it’s evident their wish has come to fruition.  Derenda points to the special touches like the Charleston blue ceiling on the expansive front porch, as well as the old beams. “Finding those small touches, satisfying a person’s specific personal requests, is very satisfying.”  Derenda shares. 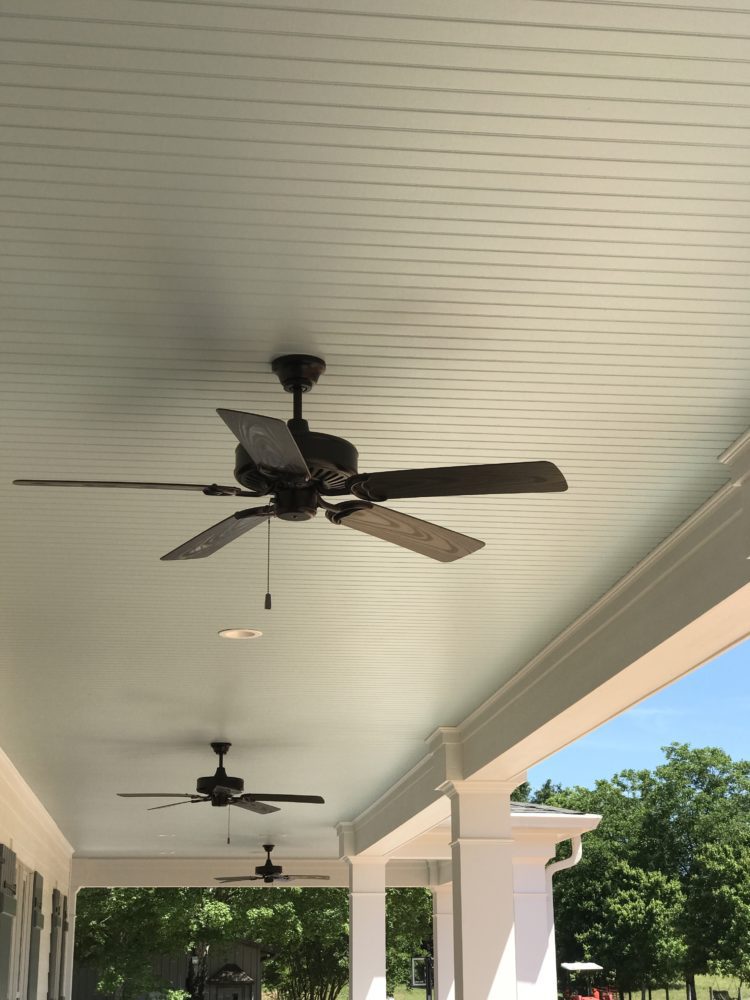 The Ropps share about another home they recently built in Travelers Rest where the homeowners had specific needs and desires for their home based on their own family dynamics, which included several beloved dogs.  “We created unique concrete floors throughout their cozy home in the woods.  The house itself fit right into the woods, which was their desire, and then had floors convenient for keeping clean with their family – which was canine,”  Derenda tells the story.

And it isn’t always just about the house itself either.  Landscaping and natural resources play a large role in Anson’s home building designs.

“Anson is super specific with his demolition crews about the trees – about not destroying them. And it’s not just saving them, but it’s also about making sure the roots are not damaged either,” Derenda says.

Anson explains how trees can be damaged with the packing of the ground around the tree, which happens frequently in construction sites from the large weight and volume of traffic crossing over the root systems.  “The roots will be starving from the ground being so hard packed,” Anson continues.  “The water cannot reach them and then in a few years the tree will die – but you won’t know it then.  It won’t be visible during the construction time.”  This is one reason Anson is particular about marking off a large area surrounding the tree and not allowing any construction vehicles to cross over that space.  It’s this sort of particular insight and attention to detail, a forward thinking kind of decision making, that is one of the marks of the exemplary craftsmanship and care that Anson brings to his work.

“Anson is a detailed person,” says his wife Derenda, who, through laughter, can attest to the benefits and the burdens of living and working with someone so detail oriented.   “He figures out how things work.  He just does,” she laughed.  “To this day, his mother saves things and when we go visit she says – here’s this mower, this toaster, this chainsaw – it won’t work any longer but we bet you can make it work.” Derenda laughs.

That’s a skill set you want on your building team for sure. 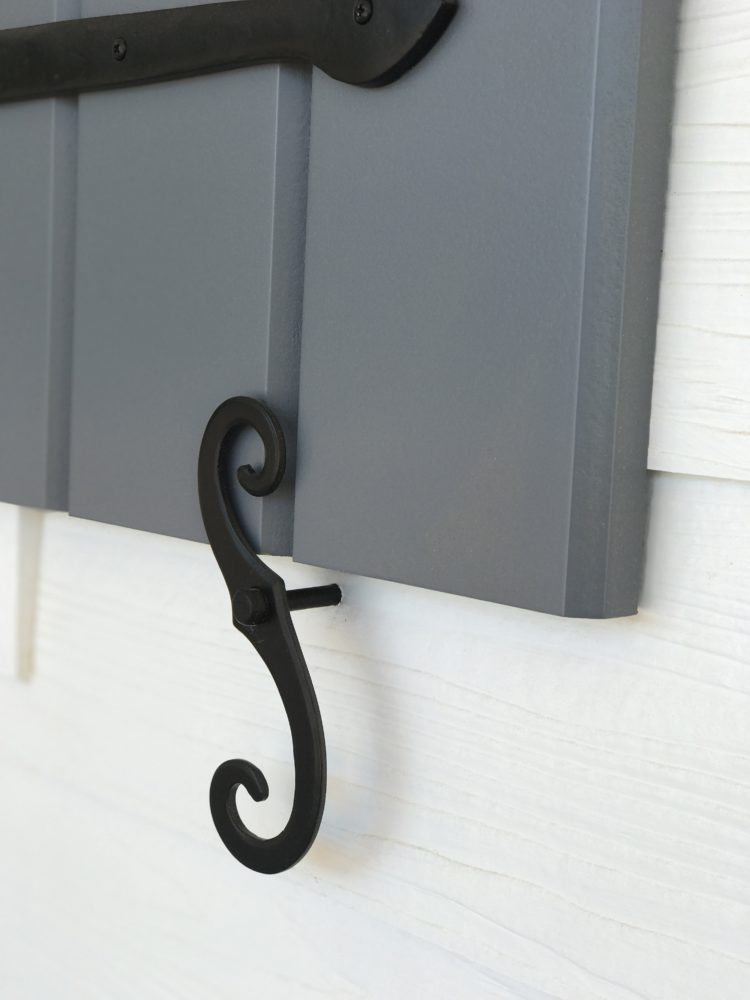 On a tour through the house I am impressed with the beauty and the design of the home.  And – you know – maybe a little jealous when I stand in the closet with those tilted shoe racks.  Yes, even the closet racks and shelves are custom designed and flawless, creative and purposeful in their clever designs.  The pocket doors that save space and the ironing board cupboard built into the wall, outlet included. 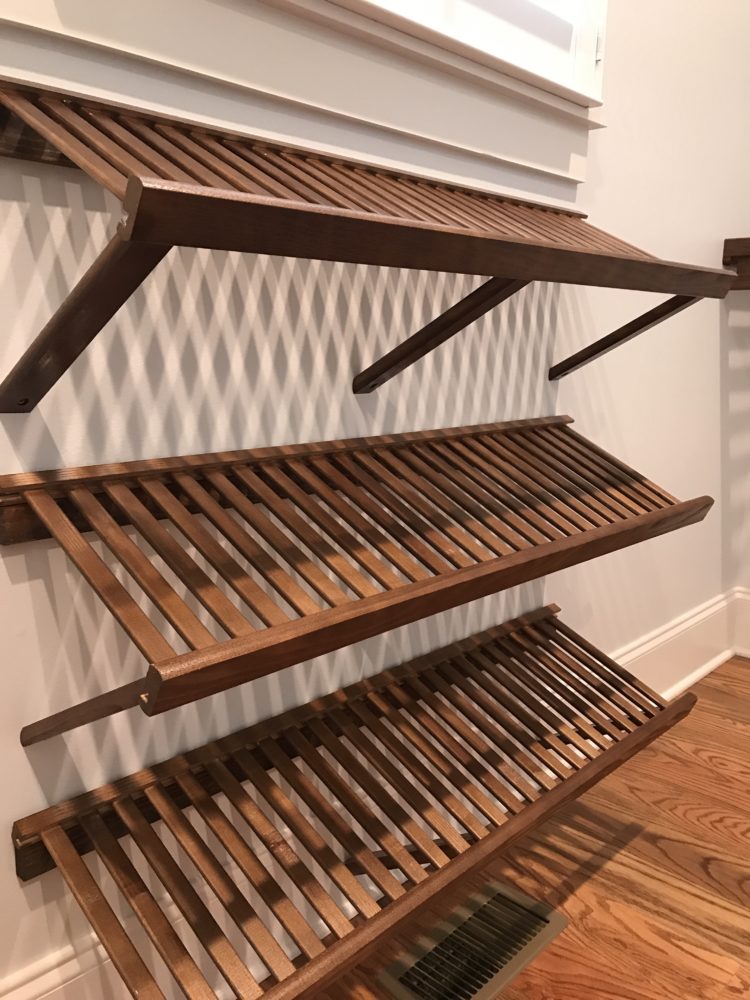 You can hear it in his voice, as Anson offers me the tour, that his knowledge is vast and his patience might be just as immeasurable.  When a client wants a change, “Can we move the bathtub here instead?  Can we shift this in another direction? Wait – I like this floor option instead.”  He simply puts pencil to paper, brain to ideas, and makes the change to please the client.  Because the client is the home owner, the reason the house is being built.  The one who actually will be both paying the price and living inside the custom built walls.

“I worked with my dad and learned a lot of the old school ways,”  Anson shares.  Both Derenda and Anson were raised in a Mennonite community.  And it’s easy to assume that the work ethic taught in their homes growing up is the same work ethic brought to the homes they are building, the spaces they are crafting.

The floors are a work of art and the detail work is pristine and charming.  I fall in love with every bathroom and each faucet.  By the end of the tour I’m thinking about asking if I can move in.  (I’m already envisioning where my personal possessions will fit and which way I want my sofa to face to enjoy the view of the backyard pool.) 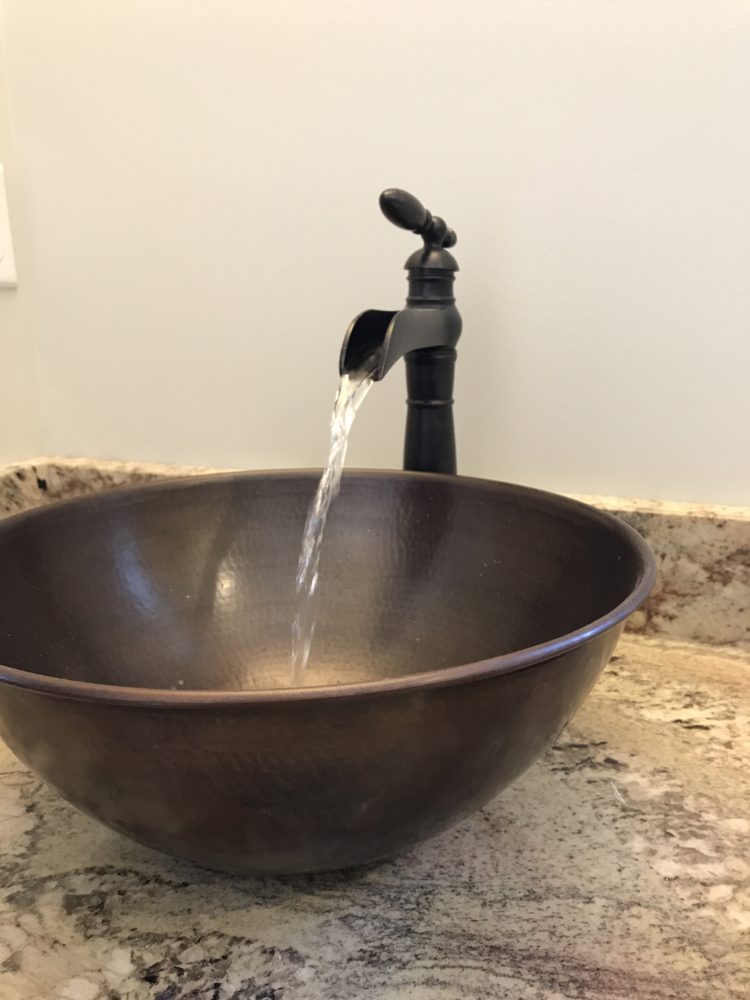 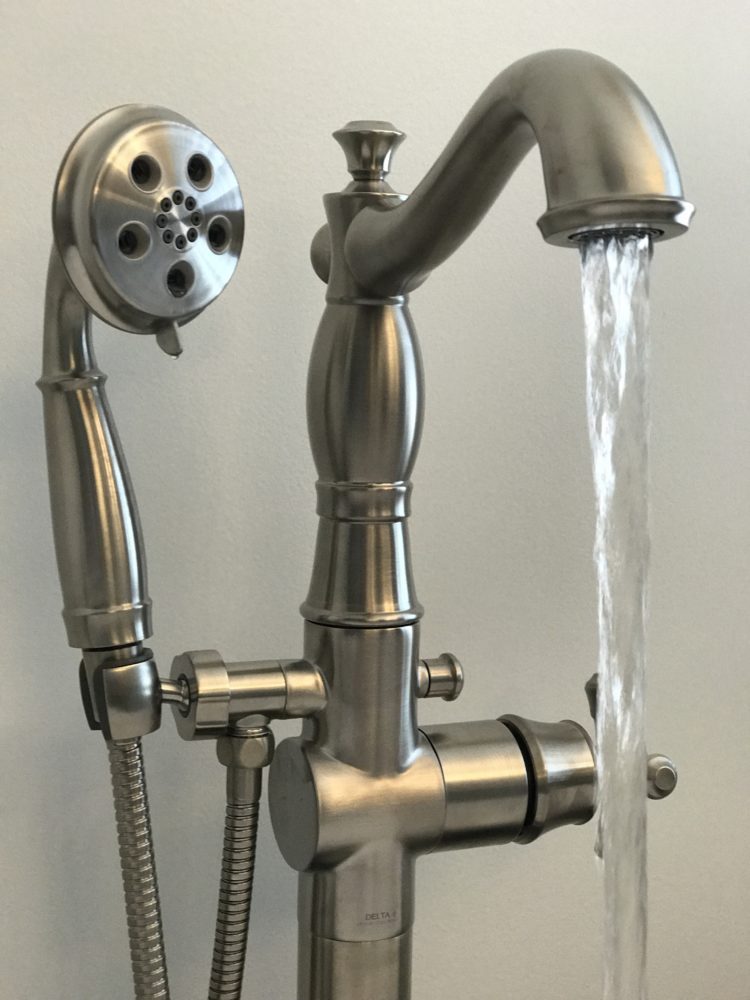 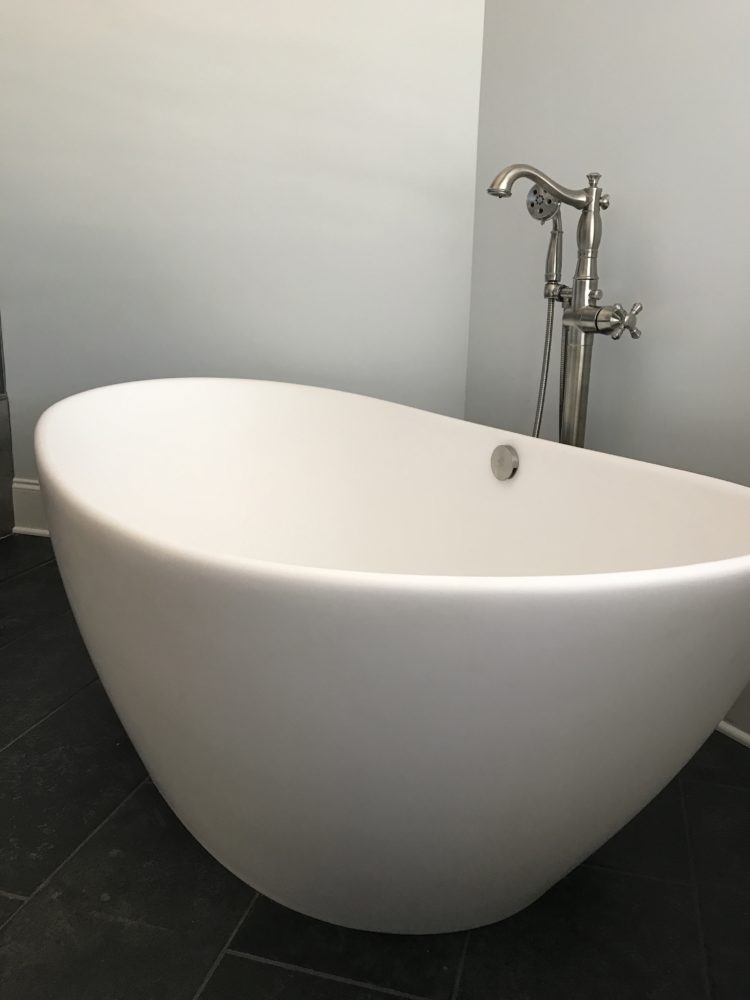 As we walk through the practically completed home, we meet a few subcontractors finishing out lighting details.  The home owner is moving in a few small pieces of furniture upstairs and the camaraderie between builder and contractor and electrician, between homeowner and Anson too, is calm and convivial.  There’s laughter and banter and getting the job done, all at once. 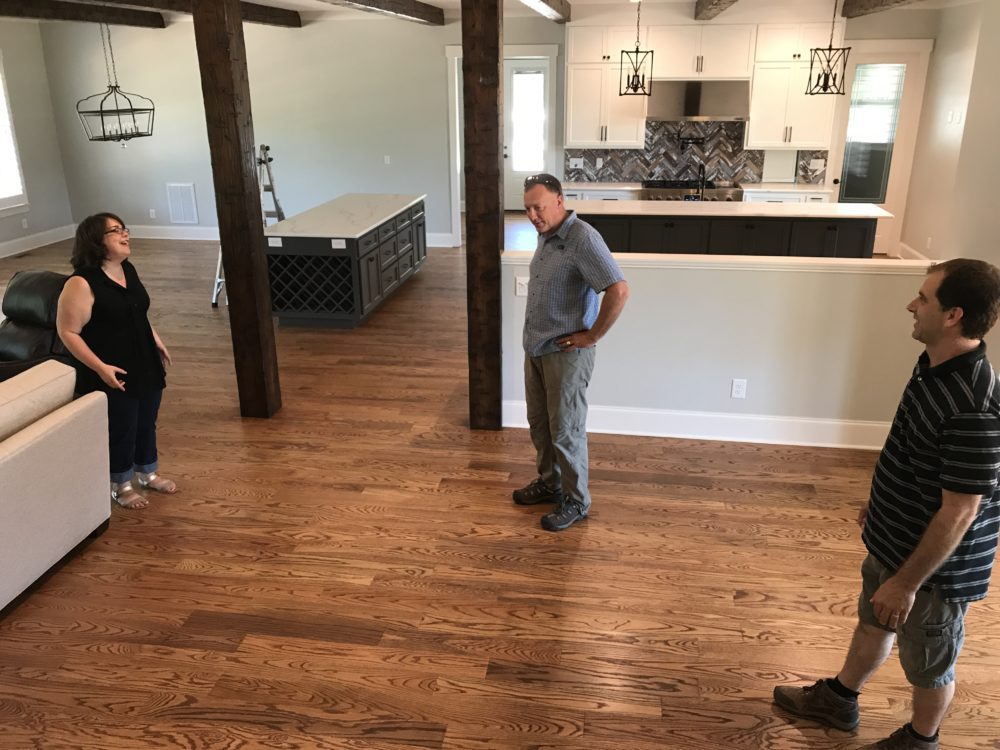 One of the reasons a client gets Anson’s full and undivided attention, his precise set of skills, is that traditionally Ropp Builders is working on one project at a time.  “Sometimes there’s a little overlap, but not usually,” Anson shares.  “I am the job site supervisor, so I like to be here – I do odds and ends myself.  I do a mix of both, building and supervising.”

You can’t quite get over the beauty of the simple in the bright and shiny bathroom.  Anson shares the shift and change of the bathroom model, of the ideas and the challenges of offering the correct drain to the shower and the tilting of the floor in order to provide the best showering experience and to have no standing water.

Another bright and shining star in this particular house is the stand out mantle.  Your eyes are immediately drawn to it in the living room and you want to hear the story of this gorgeous wood piece.  It was also a project that Anson handled personally.  “I took this mantle – from the 1700’s – in their family history – and fitted it here ”  (And of course there’s an outlet hidden tidily in the mantle, another example of forward thinking at its best.)  “This sort of thing is fun to do – this sort of project I love.” 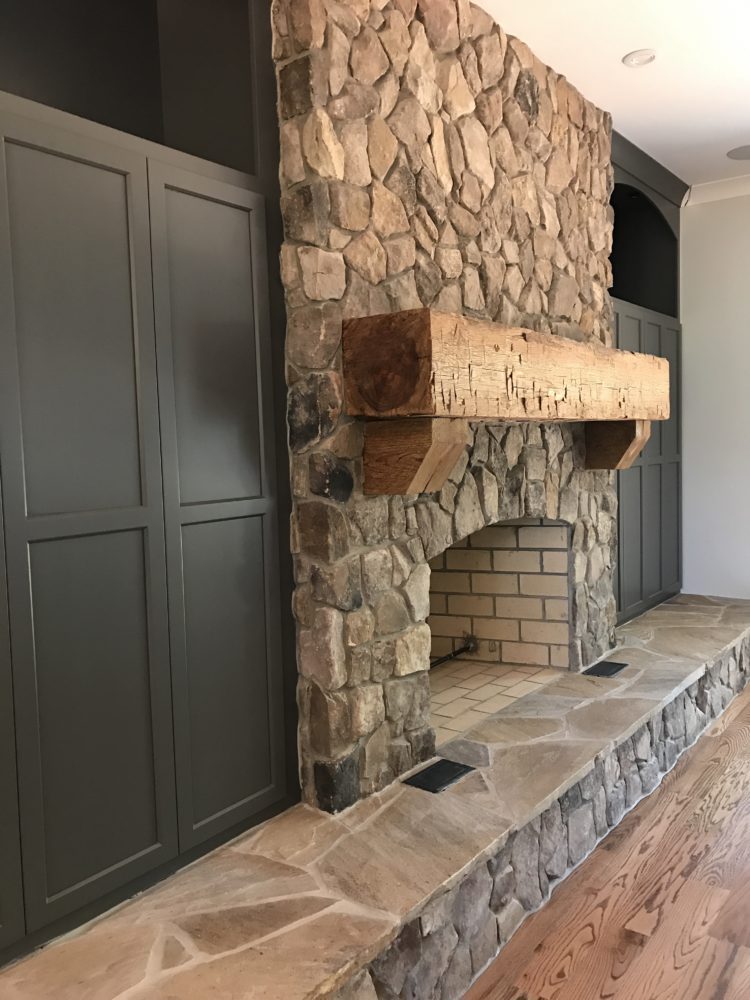 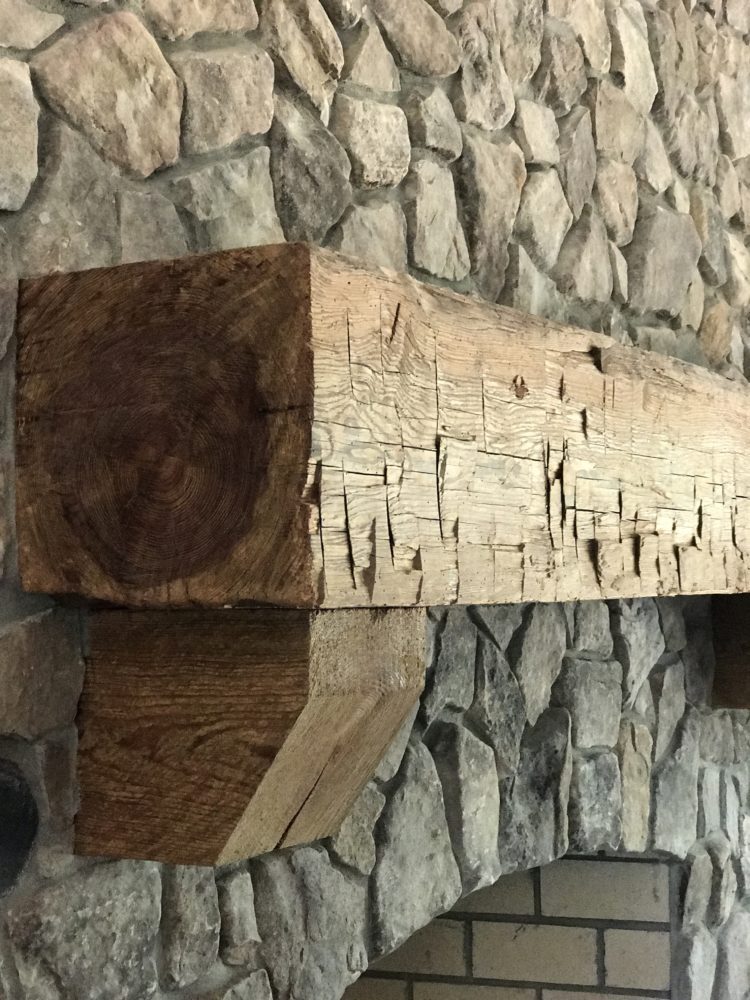 There’s some clever design features in the kitchen too – from the hidden pantry window to slide items back and forth to the faucet over the stove for easily filling the giant pasta pot on the stove, the sweetly decorated pantry door that Anson said he searched for just the right design for the homeowner.  The brick behind the stove is beautiful. 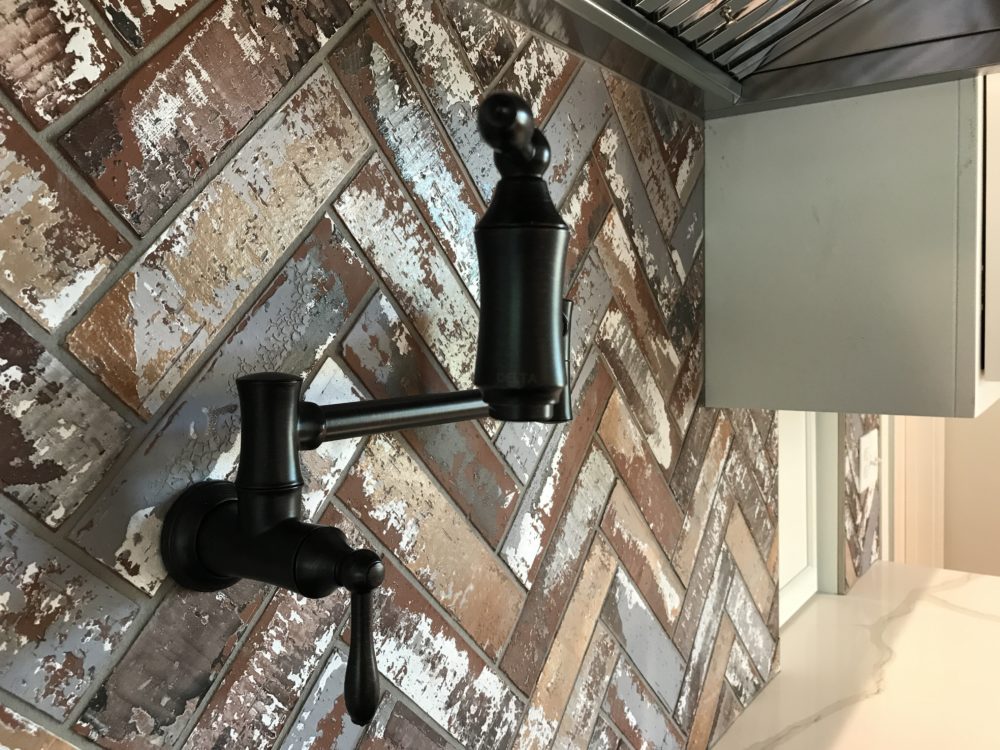 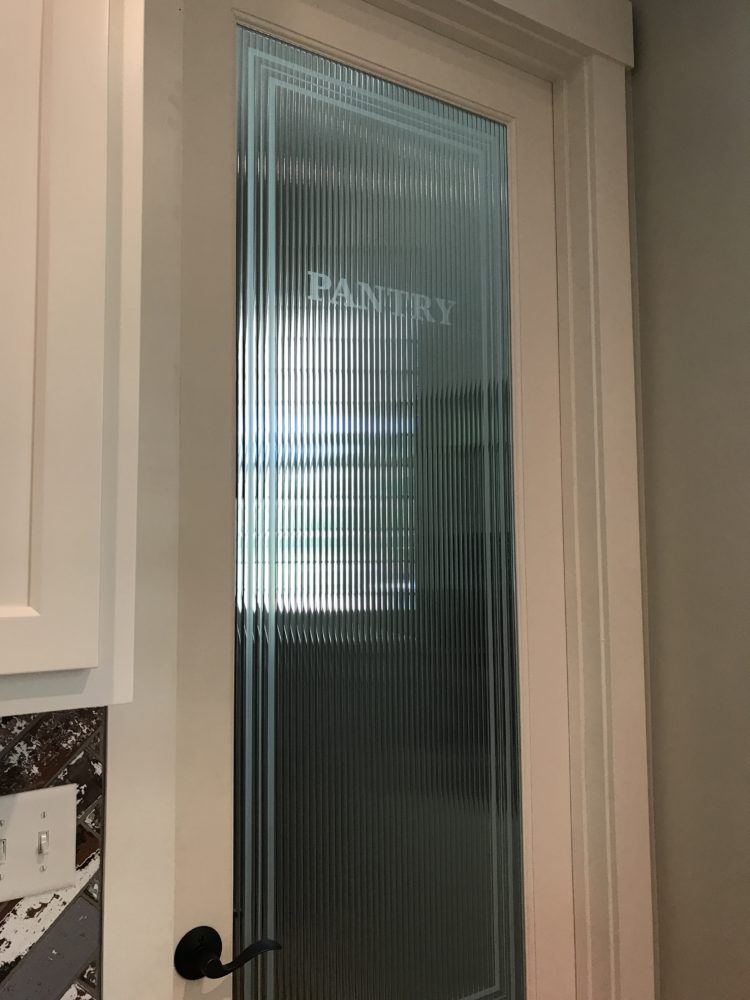 This specific build is just one of the many homes designed and built by Ropp Builders, but it’s an excellent example of what their style and quality of work looks like.

It’s not an easy task, running one’s own business.  And, like any job, it has its highs and its lows, its benefits and its curses.  “We love the flexibility of being your own boss,” Anson and Derenda both agree.  “Of course, the downside is the responsibility – you are never really off the job.”  But the satisfaction of seeing a job through, of completing a project, is the motivating factor to both Anson and Derenda that shines brighter than the drudgery of never being officially off the clock. 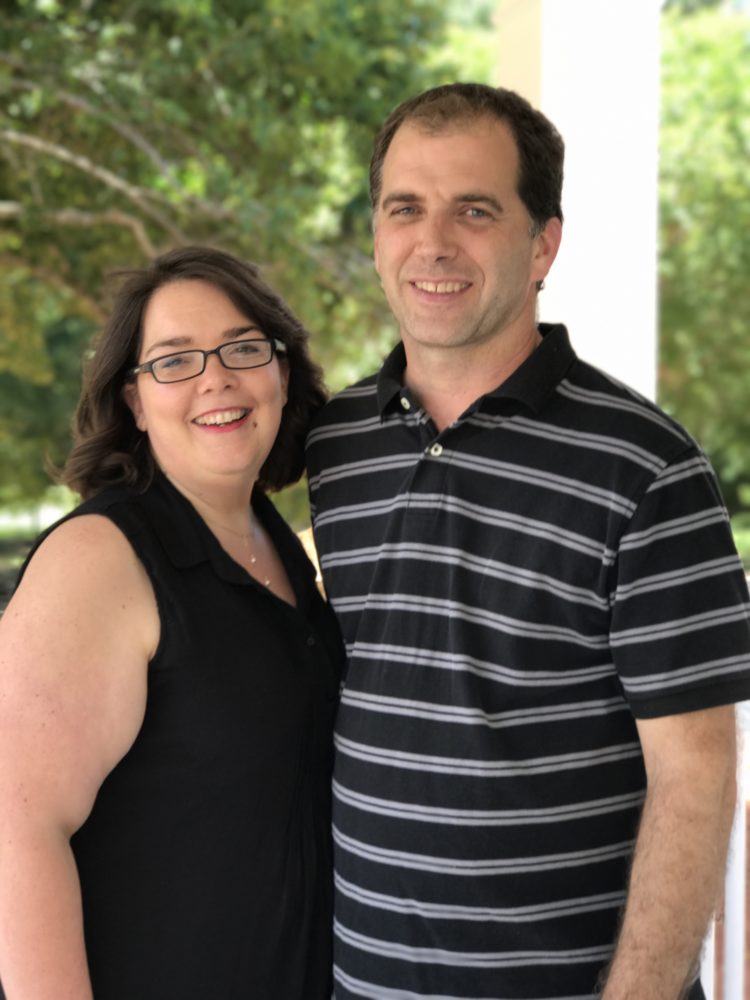 And when you’re standing on the dreamy front porch, underneath that Charleston blue ceiling, looking out at a lawn shaded by a wisely protected old tree, it’s easy to declare their efforts well worth the cost.