Nate’s – Meet the Man Behind the Restaurant

Almost exactly three years ago, Nate Corley opened the doors to a restaurant bearing his name.

At Nate’s on Highway 414 near North Greenville University you can find pizza, Philly cheesesteak, wings and more.  The sauces and the doughs are all house made.

Nate Corley is a family man – he and his wife have two daughters.  One is a student at Anderson University and one is a high school senior.  He and his wife have been married more than twenty years and he shares some great family stories that reveal his love and appreciation for his people. 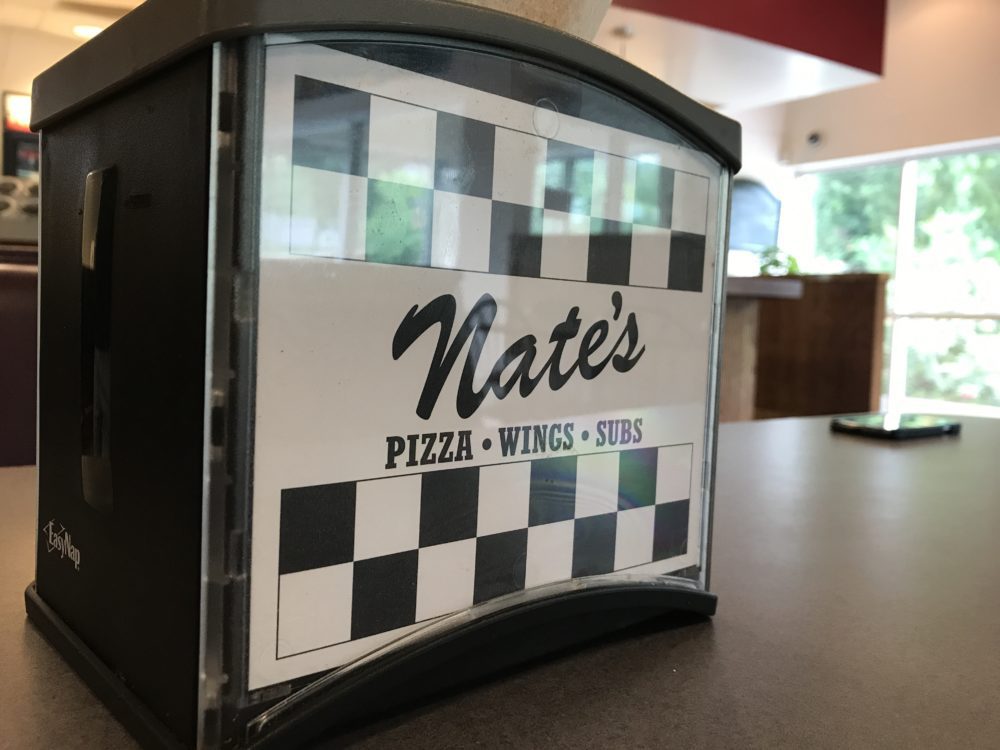 Despite Nate’s first high school job being at a pizza place, his long term goals as a college student really weren’t wrapped up in dough and pepperoni.

“I attended Furman University and came out with a degree in sports management,” Nate says, leaning back in the maroon vinyl chair in the wide open space of the restaurant.  His voice has a gentleman’s southern drawl to it and he talks with a flourish of his hands from time to time.

During college, Nate continued to work at his old high school pizza job because the commute was easy and the job was available.  “A lot of kids do the same thing here for me now – work a part time job and take classes,” Nate continues.  After college Nate interned with the Greenville baseball team.  “It didn’t take me long to realize I wasn’t going to make much money in minor league baseball,” he laughed.  But through a connection at his internship, he moved along to a job with the Wellness Arena in downtown Greenville where he worked booking events.  After another job shift that ended abruptly, Nate found himself with two young children and no job to fall back on.

Another mutual friend and he connected over – you guessed it – pizza (at a restaurant Nate and his family frequented) and they began to talk about franchising and working together.  In 2001 Nate and a partner opened several pizza restaurants throughout the Upstate.  “I was running myself ragged,” Nate recalls.  “It eventually caved in and I sold off the restaurants and rolled everything into one store in Cherrydale.”

At this point in his story, Nate shares candidly about how he felt at a loss for what to do.  “I was giving up my best years of earning potential to make no money and I had this family I was hardly able to spend time with.  I felt I was cheating them – I was really torn about what to do.”  That was when Nate knew something had to give.  Something had to shift.

An opportunity to sell the location of his original restaurant opened up and Nate said he jumped on it.  “At that point, I was unsure if I wanted to continue in this line of business or not,” Nate says.  The schedule was brutal and the reward seemed small.  Finding out he was unable to make a profit from the sales of his restaurant supplies, he decided to see if he could buy a restaurant, supply it with all of his tables and restaurant materials and then sell it all in that manner.  He grins a little.  And we both know that the story isn’t going to turn out like he originally thought. 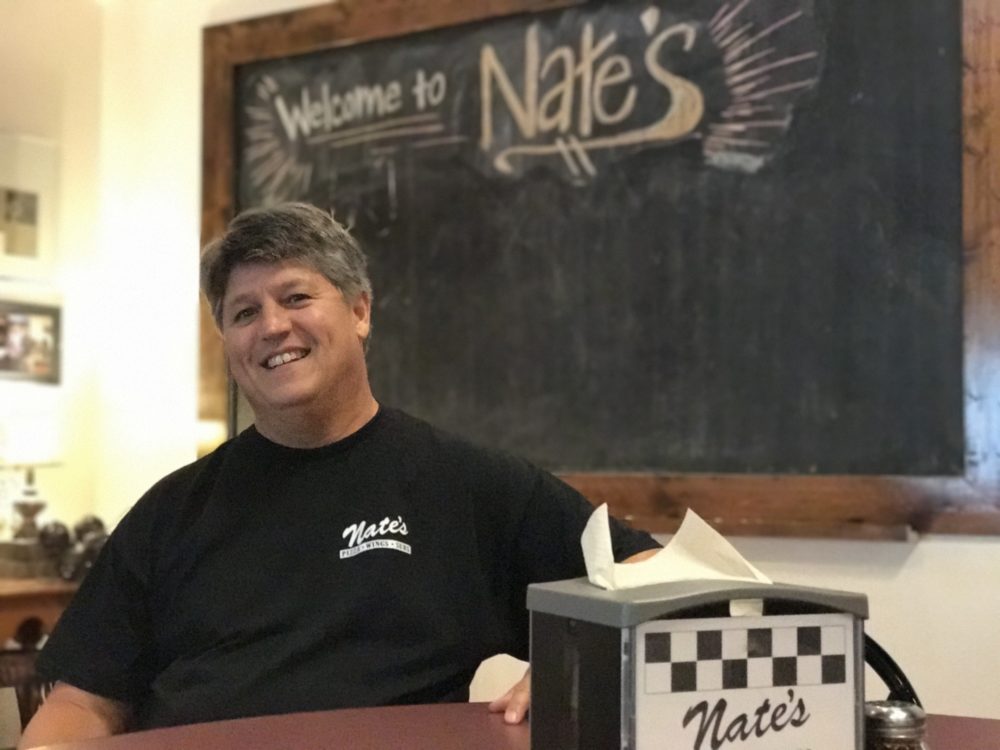 “We got here and people kept coming in and asking what we were building and I began to think – huh, maybe this will turn into something.”  Then he laughs, a hearty kind of laughter, born of both triumph and trial.  “And then – well, we’ve been so well-received, I just never did sell it.”  I join him as his laugh echoes in the restaurant, empty this morning before the doors officially open for lunch.  “It’s so much less stressful at the end of the day when you actually have more money in the till than you started out with.”  And then that infectious grin again, followed by the trailing laughter.

One of the things that Nate appreciates and values about small business ownership is the fact that you get to, in his words, control a bit of your own destiny.  “Plus, I really hope that I’m having a positive influence on the young people I hire and work with here.” Nate confesses that he probably spends more time at the restaurant than he has to.  “I know I have people who can make dough and do prep work, but – I don’t know – I just still do it,” he smiles.  “I like it.  It’s not behind a desk.  I like the interaction.  I like establishing relationships with people.  I think that’s sort of what business is – the businesses I frequent most are the ones where I know the people.”

Nate laughs quickly and easily and his conversation is friendly and engaging.  He’s got a wide and welcoming personality and that’s just the sort of vibe you want in a family style restaurant.

Nate’s isn’t just a pizza place, of course.  They’ve got wings and sub sandwiches – Nate recommends the Philly cheesesteak – and later that week I took his word on it and gave it a go myself.  Let’s just say – Nate speaks the truth. 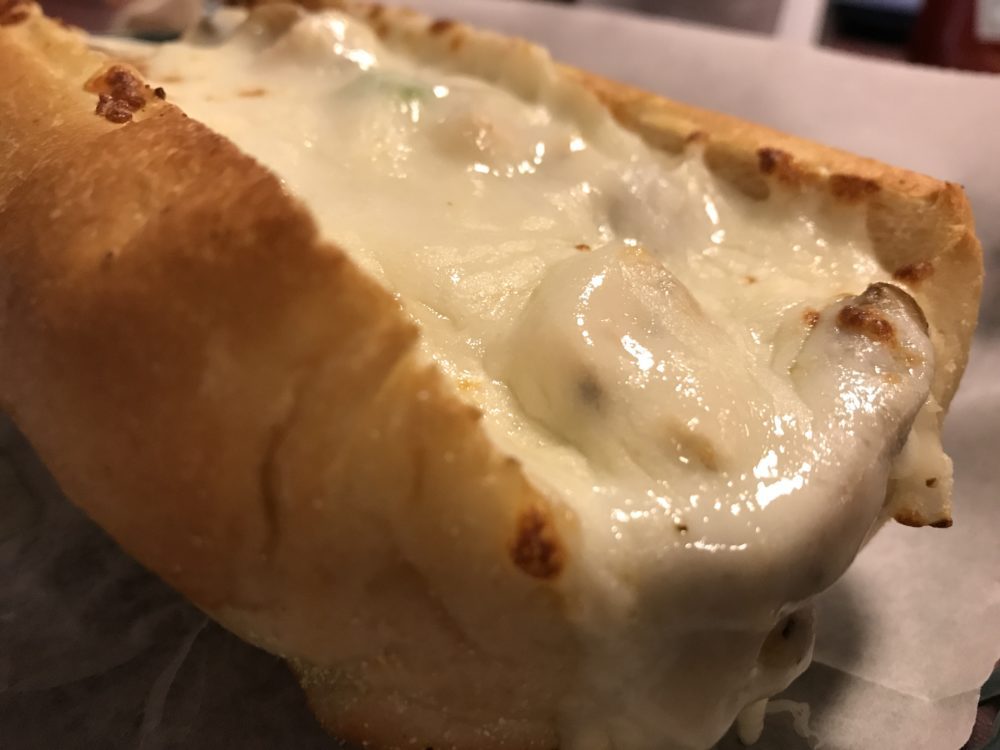 The restaurant enjoys a friendly relationship with nearby North Greenville University and frequently serves up pizza and wings and subs to the entire football team and other athletic teams and organizations – both on campus and in the restaurant.

On these gorgeous sunny days we’ve been enjoying recently, you can dine outside at the picnic tables and play a little corn hole in between slices and bites.

“Our local business continues to grow – probably every day we have people come in who say they didn’t even know we were here,” Nate grins.  “I think that’s our biggest potential – we want to grow locally.  Sometimes people just don’t make it down this road and we want them to.”

We want you to make it down that road too – it’s on the way to Campbell’s Covered Bridge, if you need an excuse.  Once you’ve tried the cheese steak – or the chocolate chip dessert pizza – you probably won’t need an excuse for your next visit.  And when you visit the restaurant, take in a friendly handshake with Nate – and maybe a story or two if you’re lucky.