Don’t expect this blog to be objective.  I have known Tim Davis for quite a long time and have been his colleague and co-teacher for many writing classes.  He is a truly caring and creative man and I have long admired his work and his ability to think outside the box.  Having said all of that, here’s a little peek at the world of Tim Davis.

On any given day in Travelers Rest, you may find Tim Davis strolling around downtown.  More likely, you’ll find him perched in a coffee shop like Leopard Forest or maybe a great breakfast spot like Tandem.  He’ll have his laptop open and a cup of some really, snazzy coffee close by.  His coffee is always photo-worthy. Tim is a writer, illustrator and a teacher of writers, and a freelance artist, among other things.  He’s not a native to TR but you’d never know it by the way he relates to the community.

“My love for TR—how do I explain it? I’m a northern transplant, but my roots are in small towns in New York state. That sense of community is what I love most. Many of us (especially the small businesses and coffee shop customers on Main Street) know each other quite well. We’ve involved ourselves in the growth of TR. I’ve also spent a lot of time studying TR’s history through my efforts at Swamp Rabbit Tales. It’s fascinating! TR has frontier town roots, and Echo Valley (the old western town) was a reflection of that, as well as a tribute to the train that TR loved. TR was influential in the growth of NASCAR—now similarly clothed cyclists race up and down the Swamp Rabbit Trail. Artists and musicians in TR have been making a name for themselves, as well the makers of great food! How could I not love TR?” 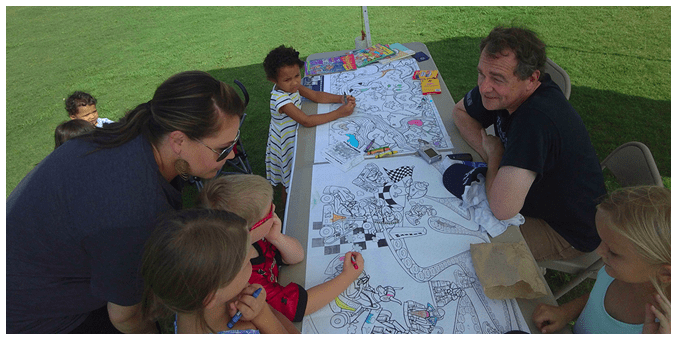 You might know Tim’s middle grade novels like the Mice of the Herringbone series or the Dutch River Gulch series and you may have admired any of his thousands of illustrations.  You can admire them now at http://www.timdaviscreations.com/  If you have children or have ever sat down in a pediatrician’s office long enough to browse the magazine rack, here’s something that you’ll find interesting. Tim has distinguished himself as the illustrator of more than 550 hidden pictures from Highlights magazine.  To this Tim says, “It’s good to be #1 at something!”  One of Tim’s Highlights covers has appeared on The Onion, The Today Show, and The Daily Show. (http://www.timdaviscreations.com/hiding.php)  It’s also notable that Tim recently offered a Hidden Pictures related event with TR Town Crawl, Roper Mountain Science Center and The Upstate Children’s Museum to coordinate with the solar eclipse.  It was called, “If You Can Hide The Sun You Can Hide Anything.”

Tim and his wife Rebecca (also a published author of biographical fiction and co-author of non-fiction books on abuse) have been married for 33 years.  They have four grown children and two grand-children.  Their oldest, Katy, is also an artist, the youngest artist ever published in Highlights, in fact.  You may also spot his daughter, Christiana, working as kitchen manager at Upcountry Provisions or playing guitar at open-mic at My Sister’s Store. 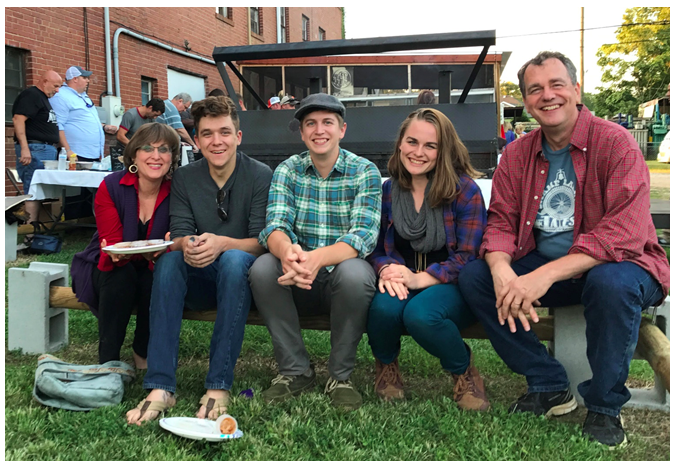 Tim has lived and worked all over from New York to Pennsylvania to right here in TR and a number of other places in between.  “I’ve worked a variety of jobs that all had an influence on me in one way or another: mowing lawns, pulling weeds, shoveling gravel early on. Then worked at a bank in customer service where I was the only guy (at 17) working with about 20 women. Summers through college were varied: Toy factory where I was the glue-man putting the labels on model race-car set boxes. Metal-plating factory where acid-laced haze filled the air, as if we were working in Hades. Then Disney World at Tomorrowland Terrace, making fast food in the Magic Kingdom. Even worked one night washing dishes in Cinderella’s Castle. I was scheduled to transfer to the Jungle Cruise the next summer (to be a wise-cracking tour guide), but decided to go on a mission trip instead. After college, I worked as an illustrator and art director at BJU Press, and had a stint working at Super Duper Publications as a staff illustrator. But the bulk of the time, I was freelancing.”

So how do you get from mowing lawns and Disney World to freelance writing and illustrating?   Tim says he was always into illustrating, “since the time I could hold a crayon.”  He lists “Walt Disney, N.C. Wyeth, Brothers Hildebrandt, Wallace Tripp, and many of my peers” as influences.  Writing came along later with influences from “Tolkien, Kate DiCamillo, Louis Sachar and my wife – who dared me to do it.”

“Currently, I’m offering classes in either writing or illustration (or both) through three organizations, GTC, EMRYS and GCCA. I have several Hidden Picture projects in the works, for Highlights, for a partner of theirs in China, and even one for the city of Columbia, MS. We just finished a Junior High Science video for New York State maple, and are planning to kick-off our next maple project with a video-shooting trip in upstate New York in October, visiting three maple farms. And of course, school presentations.”

Tim says, “Teaching writers is one of the most rewarding things I do. It has stretched over six colleges and twenty years now. There’s almost always a special bond that develops in class as students reveal their hopes and dreams, challenge one another to be accountable and inspire each others’ creativity! It’s hard to think of anything I don’t enjoy about it.”

You’ll find the links to upcoming classes through EMRYS below.  If you’ve ever wanted to write or illustrate, do yourself a favor and look Tim up.  You’ll be glad you did.