From Travelers Rest to The Winter Olympics: A Volunteer’s Story

Travelers Rest.  It’s a name we’re proud of and a name we rather like the sound of.

And, we see it in so many ways, it is a name that is true.

The rest came on either end of a long journey – the before and the after.

That’s still happening.  We’ve shared many a story of families and people from TR traveling far and wide, and resting here before their journey or returning here after their journey.  (The Baynes to Brazil for example. )

This is another story of a Travelers Rest resident who is headed to big places, but will return from her adventures and find rest here at home again.

Karen Beck moved to TR after retiring from her roles in education and coaching for more than thirty years.  Currently she works as a substitute teacher in Greenville County.  “I wasn’t quite ready to retire from teaching full time,” she admits.  Having lived in Charleston for many years, she was attracted to the cooler climate and the mountains for her almost-retirement.  Her daughter is a graduate of Clemson so she was familiar with the Upstate and also had many friends heading in this direction as well.

This week Karen will wave goodbye to her family and friends for a few months as she heads to Korea.

And what is in Korea that is drawing Karen so far away from home?

It’s the 2018 Winter Olympics in PyeongChang. 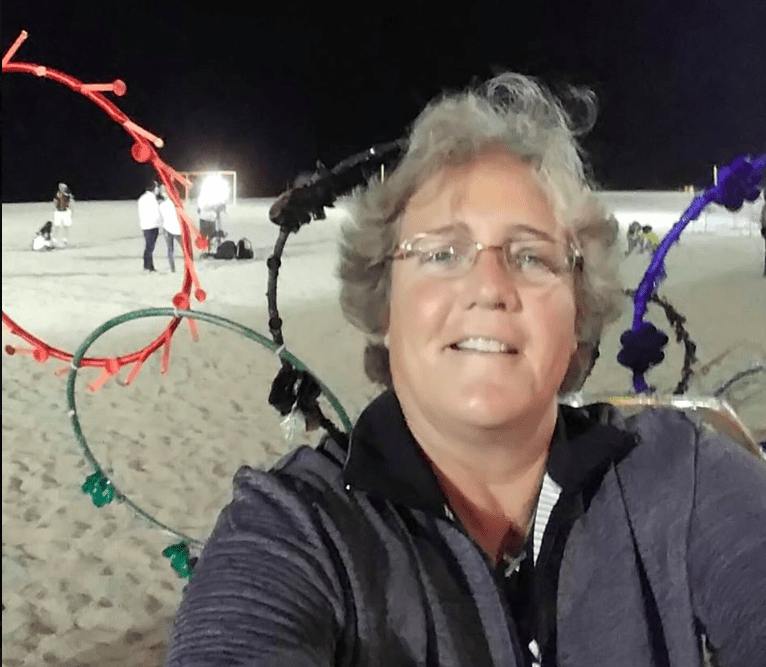 Karen will be serving as a volunteer with the Winter Olympic games.  This will be Karen’s second experience in volunteering with the Olympic Games.  Two years ago in Rio de Janeiro Karen volunteered with the Beach Volleyball venue.  (She was a former high school volleyball coach in Charleston.)  “The volunteer process takes about two years to complete prior to the beginning of the games,” Karen shares.

Although Olympic volunteering is a relatively new experience for Karen, loving the Olympics is not new at all.  “The first Olympics I attended was forty-two years ago!” Karen says.  “I went with my aunt and uncle to the 1976 Montreal Summer Olympics.  It was awesome!  We drove from Ohio to Montreal in two days and stayed in their camper.  Back then there were no computers so you had to get up early and get in line for tickets.”  Karen said she and her uncle woke up at 4:30 in the morning to purchase tickets for both the rowing and the track and field events.  (A precursor to her future, perhaps, as she also coached track and field in her career.)

“Ever since that first trip, the summer before I entered high school, I have caught the ‘Olympic Spirit’. It’s about taking a special trip with people you love and being a part of something bigger than yourself, seeing the world come together peacefully to participate,” Karen smiles.  “It’s incredible.”

Karen’s attendance at the Olympics has not been limited to that first Montreal adventure with her family.  She also attended the 1996 Summer Olympic Games in nearby Atlanta.  In 2014, Karen and her daughter visited London to see the Summer Olympic Games there.  “It was in London that I finally decided that I really wanted to help, to be a part of the Olympics. I asked a volunteer in London about the process, she gave me some advice and the rest was done by computer,” Karen says. 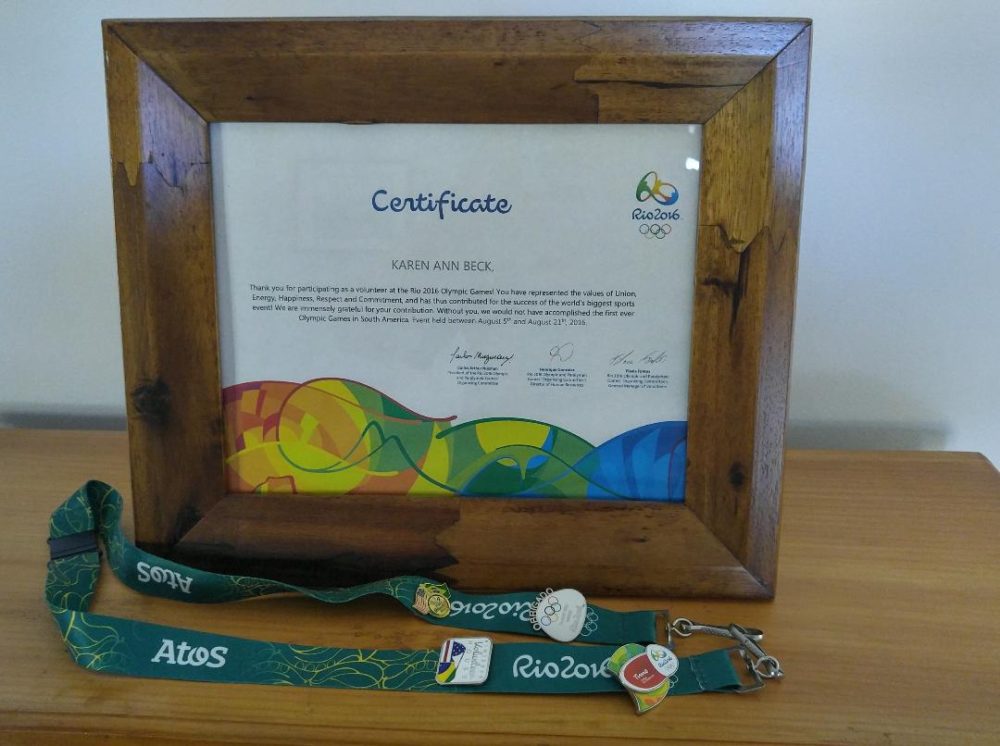 Athletics have a been a part of Karen’s life for as long as she can recall.  First there was high school athletics and then volleyball and track in college.  She’s participated in road races, softball and volleyball leagues, water skiing, biking, golf and now she hikes regularly in the upstate.

“The chance to combine my enthusiasm of sports and the world wide arena of the Olympics has just seemed to be a natural fit for me,” Karen says.  “I have tried throughout my teaching career to not only teach about the Olympics, but what they stand for….’faster, higher, braver’.  The creed is what life is all about, ‘…just as the most important thing in life is not the triumph but the struggle. The essential thing is not to have conquered but to have fought well.‘”

Having volunteered before, Karen has an idea of what to expect this time in PyeongChang.  “A day of volunteering is not always exciting, but it’s the chance to meet people from around the world.  You never know who will be on your shift or what will happen on the field of play,” Karen says.  Volunteers check in each day in uniform and with accreditation in hand, Karen explains.  (The volunteer uniform looks like the uniform in the photo below.)  After checking in, volunteers  report to their assigned areas.  Sometimes there’s a meeting to attend first.  Sometimes you have an opportunity to actually observe the event where you are volunteering and sometimes you cannot. 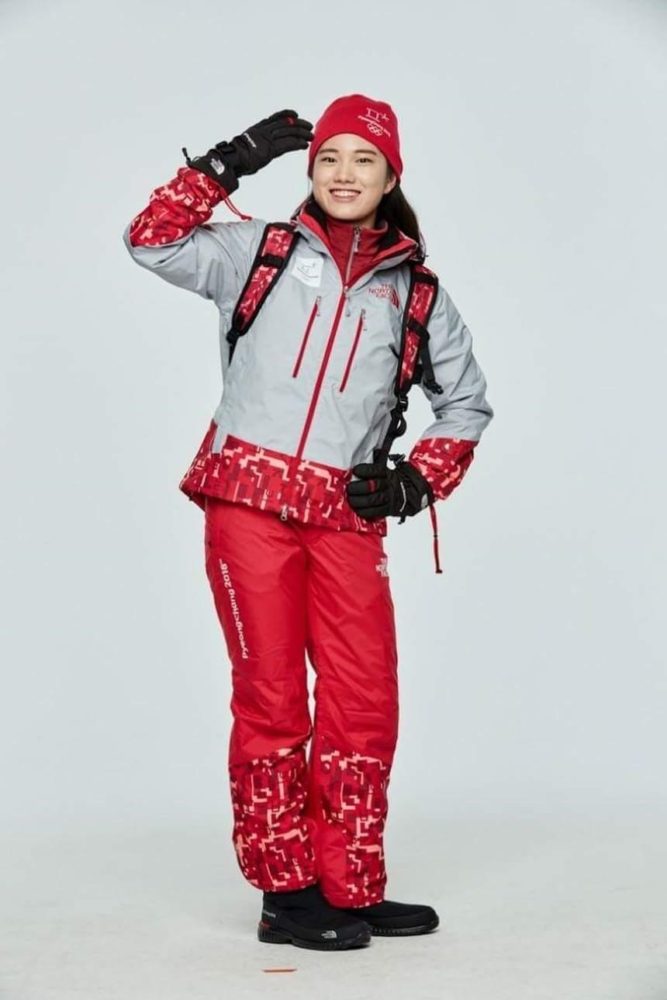 Karen has gathered a lot of stories and unique experiences as she has volunteered or attended Olympic events in her past years and expects the same in PyeongChang.  Meeting the volunteers and getting to know them is a significant part of the experience as well.  Karen says she met a man from Australia whose task it was to design all of the large flat screen TVs made especially for the Olympic Games.  And sometimes the people she meets are actually connections with her life in the states.  One of her former students currently lives in Brazil with her husband (also a former student in SC) who is the Consulate General for the US Embassy in Brazil.

“I did get to see Raven “the Hulk” Sanders throw the shot put and speak with her mother after she threw,” Karen recalls.  “It was great to have that connection. While I did not coach her, I coached in the same conference and measured many of her throws in high school, watching her beat the boys most of the time!”

Volunteers must be at least eighteen years old.  Karens says that in the host country the volunteers generally are young.  The volunteers come from all over the world and change with each Olympic Games.  Karen says the only positions that really stay the same are the paid positions like the timing sponsors. 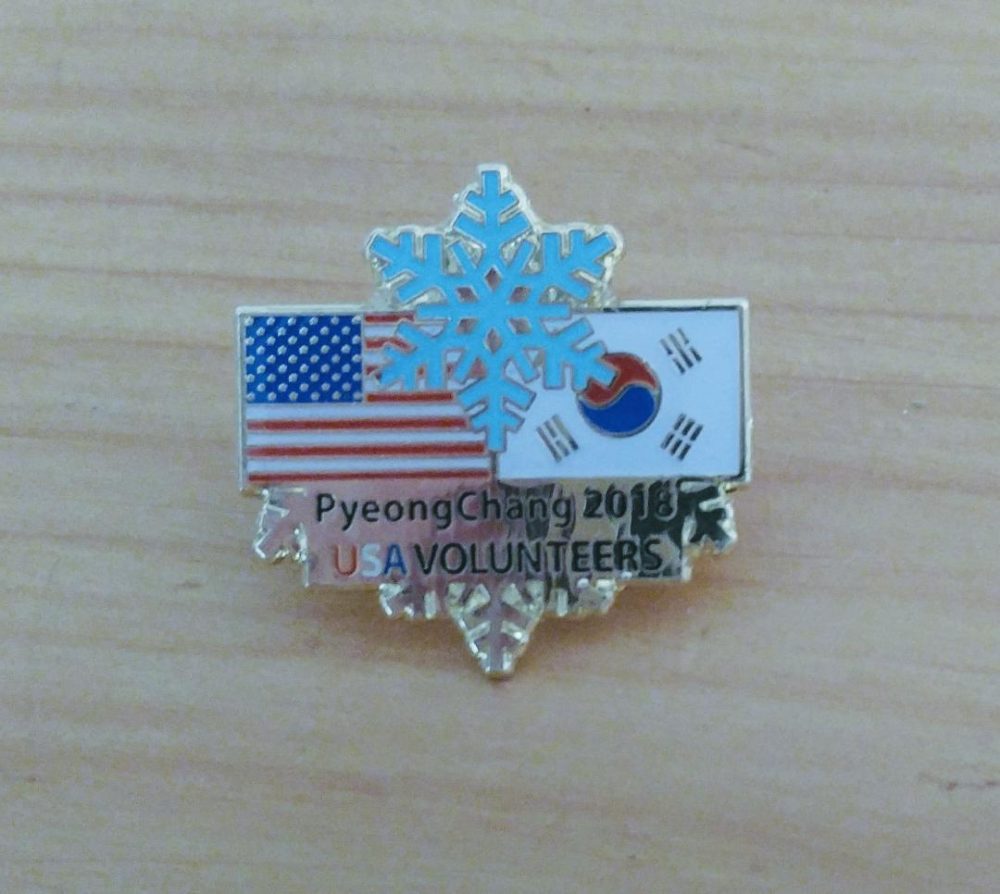 This year Karen will be volunteering on the Event Services Team at the Gangneung Ice Arena, which hosts short track speed skating and figure skating.  She will also be volunteering for the Paralympics where she will be helping with transportation in the Olympic Village.

If you ask her which is her favorite sport to watch, Karen’s answer is the same, “Track and Field – always.”

During her time at the Olympics while she is not volunteering, Karen hopes to attend as many events as possible.  “I have already purchased my ticket for the men’s snowboard finals. GO USA!”  What she loves about the Olympics, even in the cheering section, is the feeling of unity.  “The Olympics are unique in that there is both competition and camaraderie. You can cheer for your team as much as you want while sitting next to someone from another country who is cheering just as fiercely for his country, but in the end you know it is just that….a competition.  Win or lose you are both friends when you leave the stadium,” Karen says.

The Olympic volunteers all share lodging and this year’s lodging will be at the Hyundai Soo Resort (pictured below).  Karen will be in PyeongChang until March. 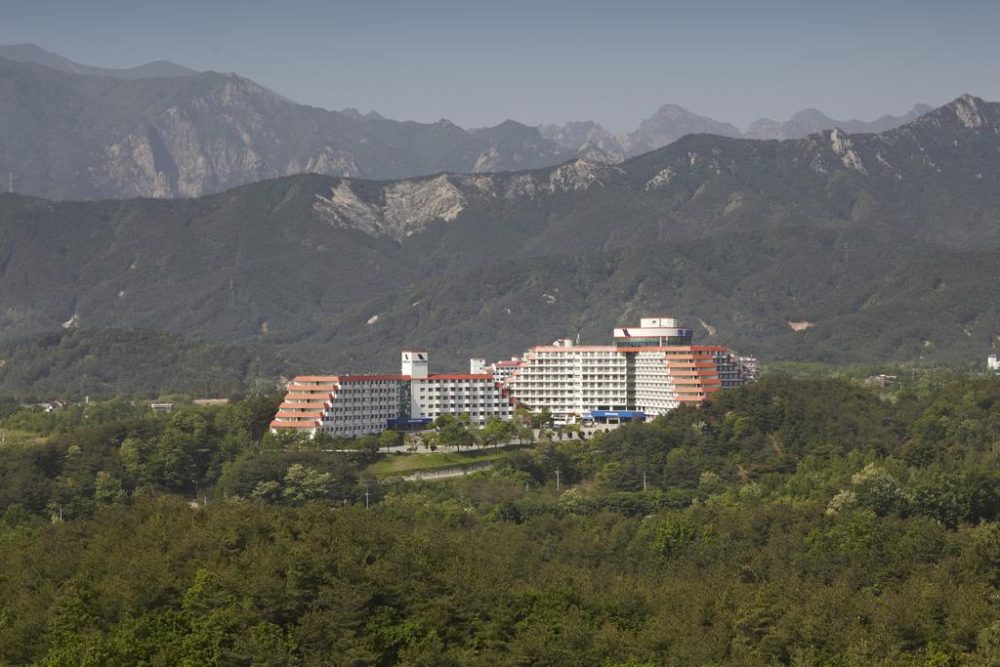 When asked why she continues to leave home and volunteer in this capacity, Karen responds, “The amount of care and compassion observed during the Olympic Games continues to inspire me, both by participants and spectators. The Olympic governing bodies were forward thinking before that was part of our vocabulary.  Words like sustainability, gender equality, refugee country, compliance, ethics …. are just a few words that come to my mind.”

We can’t wait to hear more about Karen’s adventures when she returns home to Travelers Rest.

You can support Karen and her representing our small town in PyeongChang through her Go Fund Me account.