It started at Belmont University in Nashville, Tennessee, but its ripple effects have found its path across the mountains and into our neck of the woods.

On September 23 at Redeemer Presbyterian Church at 7 pm, a musician named Matthew Smith and his band Indelible Grace will be performing their unique style of music.

What Matthew does is to take old hymns, those hymns from the maroon old fashioned hymnals every Southerner grew up with on the backside of the pews in church, and to put new melodies to the classic words.

“I heard it first at Belmont – this idea of new melodies,” Matthew says.  He was in college at the time and he was attending a Bible study and he couldn’t get the impression of those lyrics mixed with new melodies out of his mind.  Matthew says the leader there, Kevin Twit, encouraged his audience to try it for themselves – to match up the old and beautiful lyrics with some new tunes.

It would be a few years before Matthew would make this means of melodies his full time gig, but once he began transforming and combining the old with the new, it’s a niche Matthew found his talent and heart combined together for the long haul.  For more than fifteen years, Matthew Smith, along with Indelible Grace, have been writing and performing new melodies for old hymns, producing albums and performing their music live across the United States. 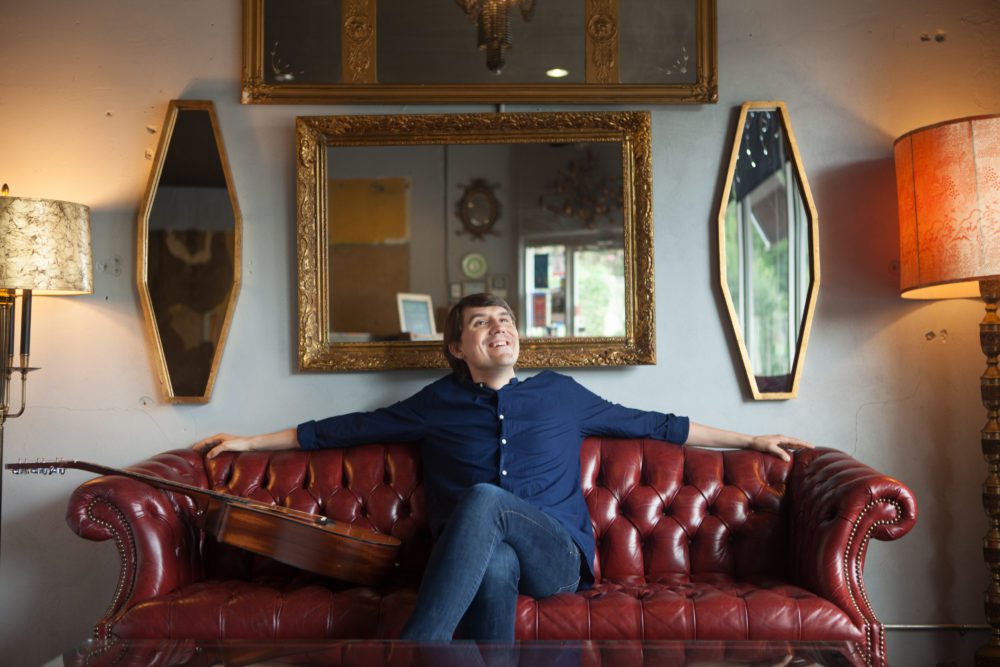 Although Indelible Grace and Matthew travel and perform in various venues and in cities both large and small, it’s a more intimate gathering that will be happening at Redeemer on September 23.

“I just love that what we do tends to serve the local church wherever we are,” Matthew shares.  “It’s more personal and easier to connect with people at smaller venues.  It’s encouraging to see how the music connects with what God is calling them, as a local group of people, to do in their own church bodies.”

Matthew and his group Indelible Grace are not newbies to our area.  “Redeemer has been supportive of us in the past and we’ve played several times in the area.  This will be our first time performing at Redeemer itself though so that’s new and exciting for us,” Matthew said.

One of the church elders and organizers of this event locally is Jimmy Kyker.  “Redeemer is striving to bring God’s truths in the form of high quality music to the Northern Greenville area.  Matthew’s contemplative acoustic style with thoughtful quality music composition hits the mark well,” Jimmy says.  “Modern music is created by starting with a catchy but predictable beat and adding meaningless words.  Indelible Grace is doing just the opposite by starting with timeless and objective truth… ancient lyrics with great depth that have stood the test of time and then adding modern singable tunes.”

Matthew admits it’s still a weeding out process – not every old hymn is a good one necessarily.  “There are a lot of bad old hymns too,” he laughs.

The appeal and the combination of both the old with the new helps to create a complexity to the music that is not always found in modern lyrics.  “I think there’s a real depth,” Matthew shares in our phone interview.  “A lot of the songs deal with topics that are not dealt with in modern song writing – dealing with themes of lament and pain and what the Christian life actually feels like.  They tend to not have an idealized rose colored glasses point of view.  They present life as it is and in turn, present God as he really is.  The structure of hymns tends to also be a story telling structure, with each verse being a new chapter in the story and so they can say more than the typical pop structure of song writing.  Because – you know, more words,” he laughs.  He adds, “I call it the unfair advantage of hymns.  It’s not that it makes them more holy.  It just makes it easier for a skilled writer to tell a story.”

Naturally, after years of performing and writing and researching, Matthew has certain hymns that have a special resonance and meaning for him personally.  “There’s one called ‘Let Me Find Thee’ on the new album (Quiet Hymns) that has meant a lot to me over the years.  It’s a hymn that speaks so well of God inviting us to bring suffering to him – he doesn’t shame us or try to fix us.  He understands experientially what suffering is – not just the profound physical suffering of the cross but the regular everyday suffering that comes from living in a broken and fallen world.”

We listened to the “Let Me Find Thee” hymn as we wrote this article – it’s truly lovely.

You can buy tickets for the concert at Redeemer here.

If you have any questions – feel free to email them to redeemerculture@gmail.com.

And, for those of you who want to learn even more about this specific style of music writing, Matthew Smith will be presenting a seminar on hymns at 5 pm before the concert begins.

Watch the beautiful video for Matthew’s song “God Himself” to see and hear a taste of his work.