Half a Century: A Long & Beautiful Story

Half of a century.

That’s enough time to start and to end a dozen jobs. That’s a life long marriage. That’s time to earn some grey hairs – or to lose some hair.  That’s fifty years.

And it’s exactly how long Steve Borklund has been working for State Farm Insurance. 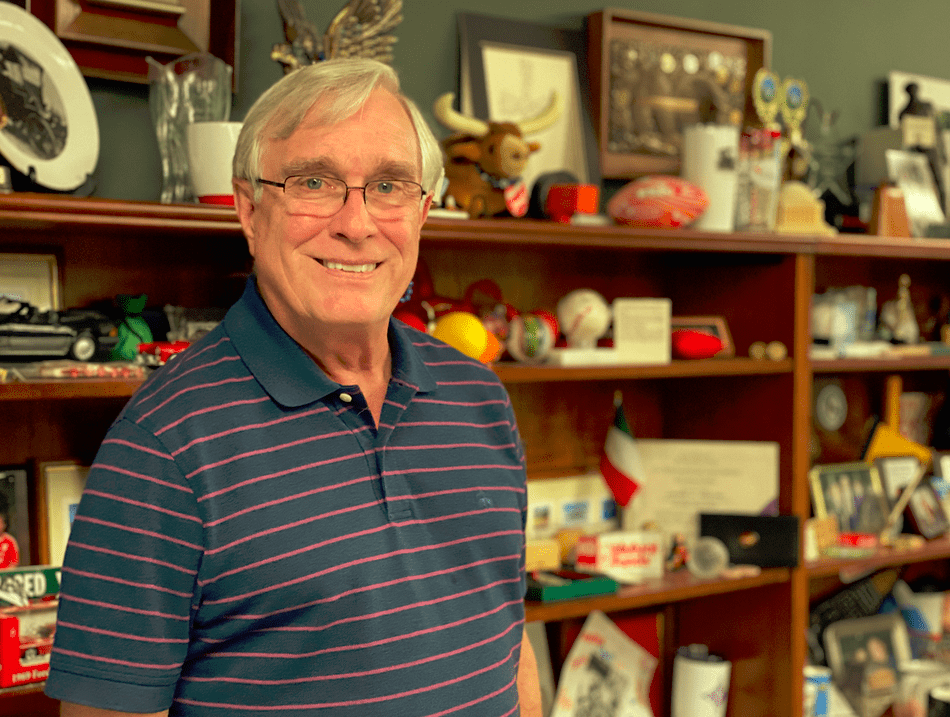 In our current work climate, most of us don’t stay at one job or in one career long enough to reach the half a century marker.  And it’s possible that when a young and ambitious Steve Borklund graduated from the Kansas State Teacher’s College and took a position in Independence, Kansas as a State Farm agent in 1970, he couldn’t imagine fifty years with the same company – but he says, even then, he could envision staying in the insurance industry for his life’s work. 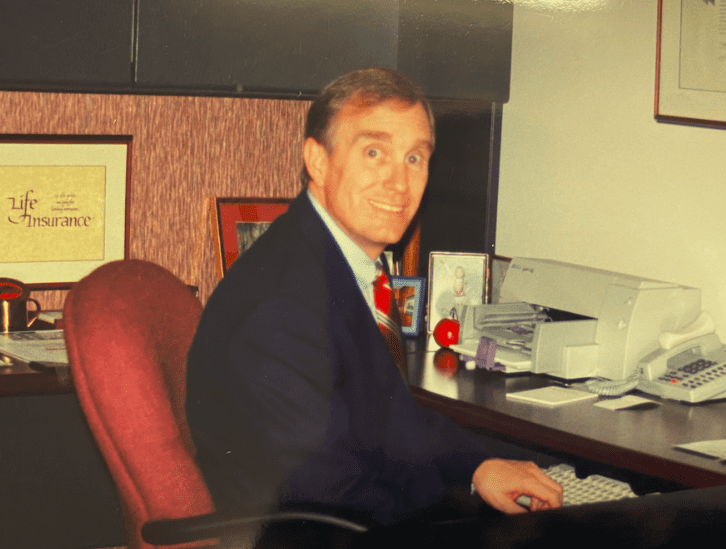 That’s exactly what he has done.  Actually, he assumed he’d stay in Independence for his entire career.  But that wasn’t the way it actually went down.  Not only does June 1 mark fifty years for Steve with State Farm, it is also the twenty-five year anniversary mark for his work here in Travelers Rest.

But let’s go back for a minute to that young Steve in Independence, Kansas.  Twenty-two years old. The second youngest State Farm agent in the country at that time.  Over the course of the next twenty-five years Steve would work as an agent, as an agency manager, an agency director and as a district manager until ultimately he would own his own agency. He would work from Kansas and Maryland and Florida before finding his way to our town – where once he landed here, he never left again. 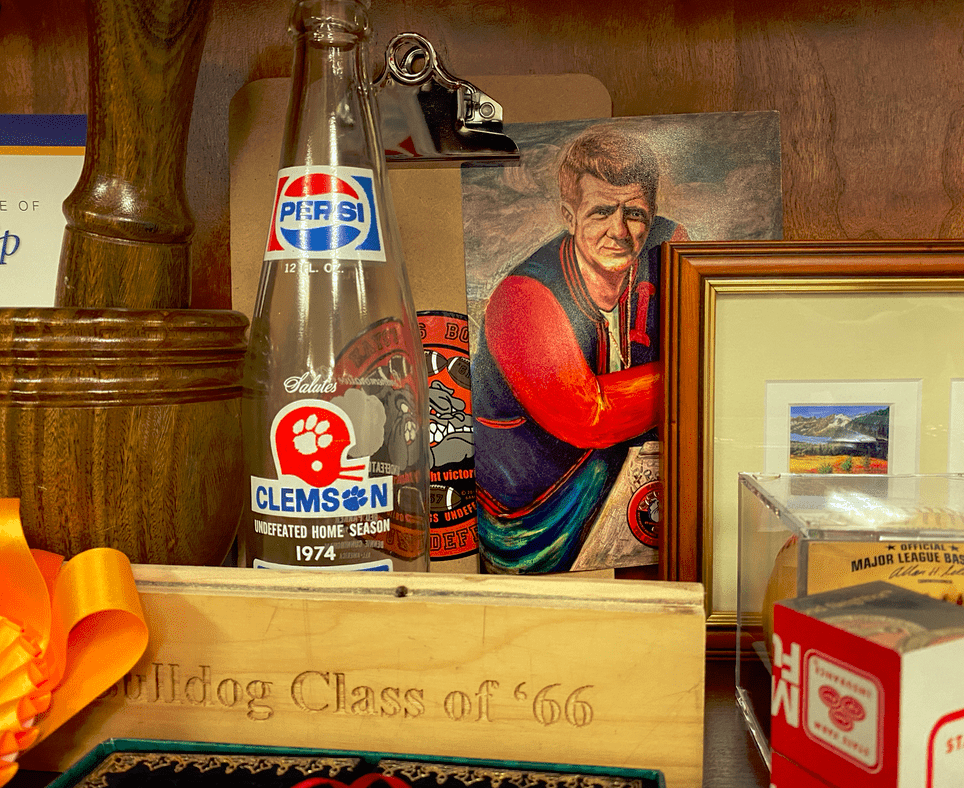 The awards and the accolades that Steve has earned in his long and full career are too numerous to count – and a host of them decorate the shelves of his office upstairs on Poinsett Highway.  He’s been instrumental in beginning the Greater TR Chamber, which was originally called the Travelers Rest Area Business Association. He’s served as its president, been nominated as Business Person of the Year and Citizen of the Year and so much more. 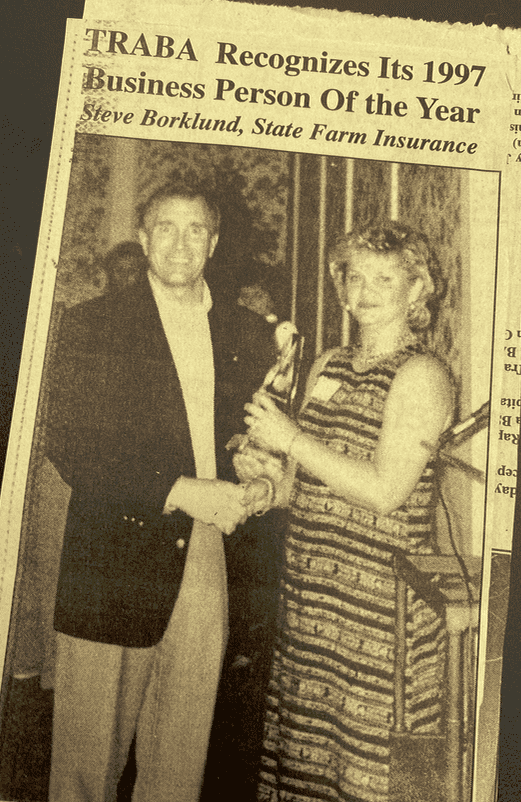 Steve is kind of a local legend around here. His generosity and his hard work precede him. Of course, if you were to tell him this to his face, he would likely blush and point the conversation toward another topic.  His humility is as great as his generosity and the ways that he has served our community and given back to the citizens of Travelers Rest are many.

Steve Waddell works with Steve at State Farm and we asked him to share a favorite story from their many years of working together.  “Trying to find one story for my admiration for Steve Borklund is impossible,” he says.  “I have met a lot of people in my life but none compare to him. I could tell you literally hundreds of stories where he has shown acts of kindness, most of the recipients have never even known where it came from.”  One of the other traits that Steve Waddell praised is the fact that their business ventures have always been entered into with a handshake. “In this day and age, that is truly refreshing.” 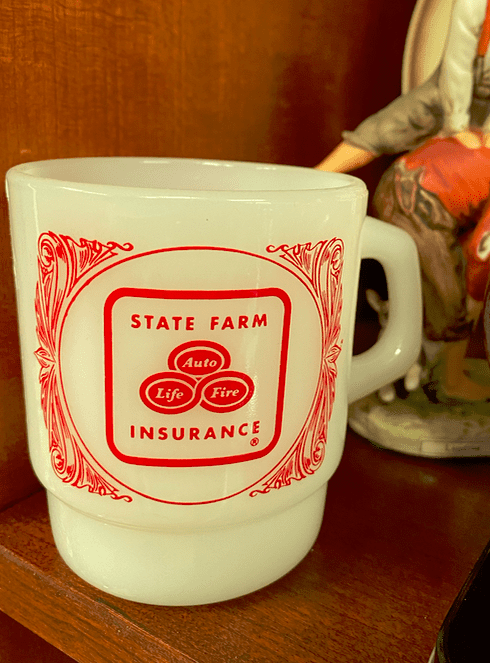 When Steve Borklund and I sat down together and I asked him a few questions, we laughed and talked about the long journey that has brought him to where he is today.

“When I first drove through Travelers Rest I thought – what the heck have I gotten myself into,” he laughs, recalling how many buildings were closed and how few businesses were active in TR at that time.

That time would have been 1995.  He took over an agency run by Jim Crosby in a building that was falling down then – and has been torn down since that then.  Eventually he purchased the property and built the office he is currently in now on Poinsett.  Back then, the town of TR looked dramatically different. City Hall was doors down from his office and there were very few open businesses on Main Street.  There was a Winn Dixie and an Ingles serving all the TR grocery needs at that time.  (Maybe some of y’all recall the Winn Dixie days.) 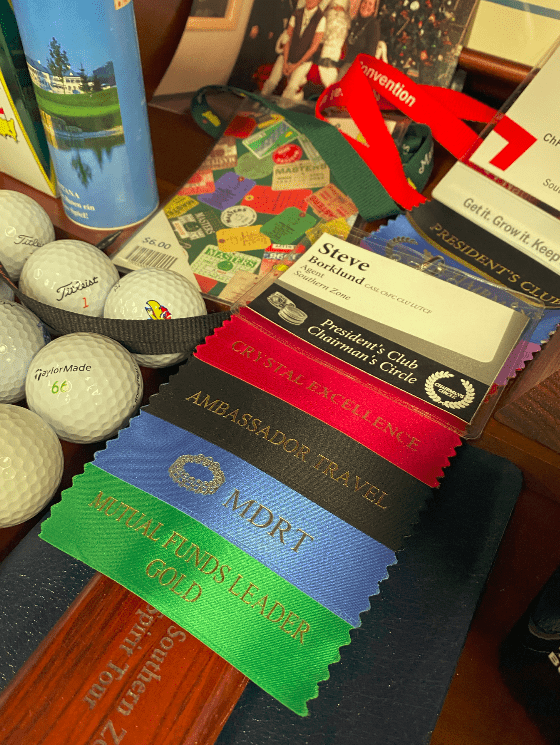 Change happens over the course of a half of century.  Both slowly and rapidly. We know this. The insurance industry has changed too, of course. From stacks of paper forms to the modern stream-lined affair it is now.  From customer expectations to the cost and the value of insurance as well, particularly life insurance.  A side note in inflation – in 1970, Steve’s rent for his office was only $75 per month.  The company’s first computer took up the space of half of a desk and was basically just a giant calculator. 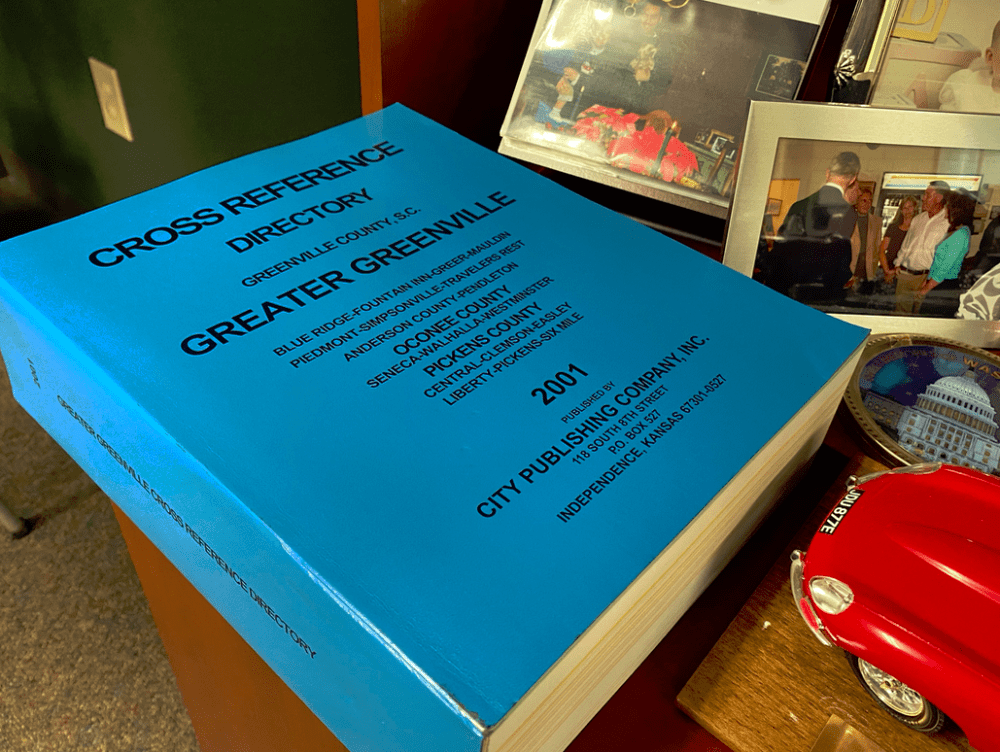 “I’m a zealot for life insurance,” Steve admits. “I’m a true believer in it.”  He shares several stories about the impact of being able to help people and their families because of securing life insurance policies for loved ones. Often his stories are peppered with first and last names of people who he worked with fifty years ago, clients whose stories became a part of the fabric of his own story. (And we’re impressed with that ability to remember a name from fifty years ago too!)

A lot has changed in TR in these past twenty-five years.  Things were pretty barren at the time Steve first landed on our streets.  For a short time Nancy Burns even kept a store in Steve’s office and Jim Stroud had a studio upstairs at the State Farm office.  We talked about how positive the addition of the Swamp Rabbit Trail has been for Travelers Rest and its economy.  “And here we are, years later,” Steve says, “And TR is not a place to go through, but it’s a place to come to.” 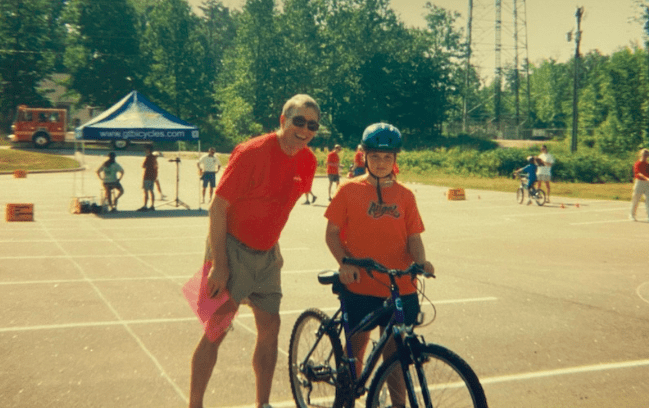 A lot has changed for Steve too. When I asked him about those changes, the ones that happen on the interior of his heart as opposed to the changes on our town’s streets, Steve almost immediately grew quiet. His eyes filled with tears and his voice cracked with emotion.  The entire vibe of the room shifted. I waited quietly.

“Let me tell you about my philosophy,” Steve said. “I think when the Bible says – ask and it shall be given to you – it really means that.”  He shares some personal stories about the role he’s been allowed to play in certain situations that have helped people. Ways he has seen lives helped that matter deeply to him. Particularly the ways in which State Farm has been able to give back and help children.  “It’s an honor,” he says.

As he talks about the honesty and the integrity that he hopes embodies his choices, he pauses. “I sincerely believe that the more you give the more you get.”  These words are genuine. His passion is evident as he speaks about the work State Farm and his agency have done at schools – local high schools and elementary schools, local universities. “Teachers don’t have the supplies they need. Kids don’t have the supplies they need,” he says.

“Selling insurance is an admirable job, if you do it with honesty and integrity. But that’s just a profession,” Steve is speaking slowly, pausing as he controls his feelings.  “The real life comes in giving back. To whom much is given, much is expected. God has blessed me very dearly. I don’t think He would look very highly on me if I didn’t give back.”

This undercurrent of emotion, these strong sentiments, this ebb and flow of the feelings that run right under the surface are just a picture of the entire man that is Steve Borklund – and who he has been for the quarter of a century he’s been working hard for the community of Travelers Rest. 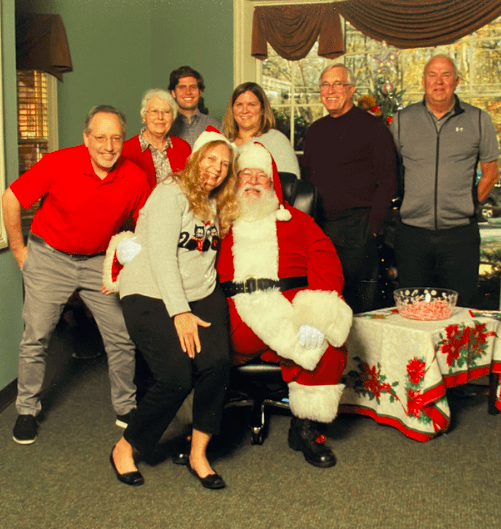 He’s right. A lot has changed. But some things have not.

And here’s one of those that hasn’t changed – Travelers Rest is a better place because of the love, affection and service that Steve Borklund has brought to this half a century career that is much more than a career.  We’re happy to honor him and celebrate his work.