Taking It All In: A Lake Jocassee Highlight

Photos and Story by Clint Keels

“Back up in here somewhere is the Thompson, the Horse Pasture, and the Toxaway,” I said.  “We’ll work through each one of these and I’ll show y’all a bunch of it or something.”

I was talking to my friend Koby and pointing to scale drawings of terrain features on a sun-beaten and damp map.  Fortunately, I was able to mutter that phrase, or a rendition of it, on a Tuesday and a Sunday this week while either digging through ice to fetch a Shinerbock Ruby Redbird, or peeling an orange. 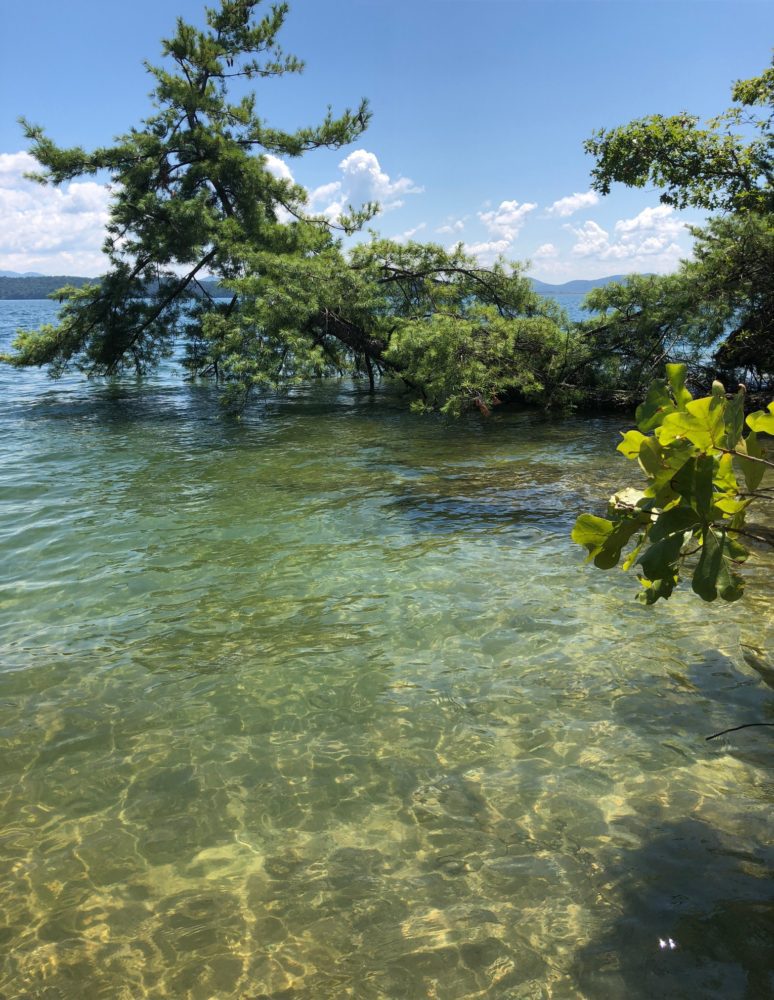 Dazzling emerald greens melt into mobile and wavy blues that seem to neither start nor stop – they occupy the sort of eye-magic reminiscent of something Tom Wolfe would’ve written about using words like “Day-Glo” or “psychedelic”.  Each overhang of earthen and red sediment plead with the wakes and the yaws of pontoons, bass boats, johnboats, and the Hummer H2 of the water … the jet ski, as they chop another inch of shoreline or feed the old growth of her shoulders.  The give and the take.  Stands of obscured and heavy granite washed by water or unmoved otherwise bastion themselves in scattered ranks amongst the water’s edge.  Oaks and pines fight those monoliths for space, while they simultaneously reach skyward for the orange and house the bluebirds who forage the worm-rich soils and moss mounds. 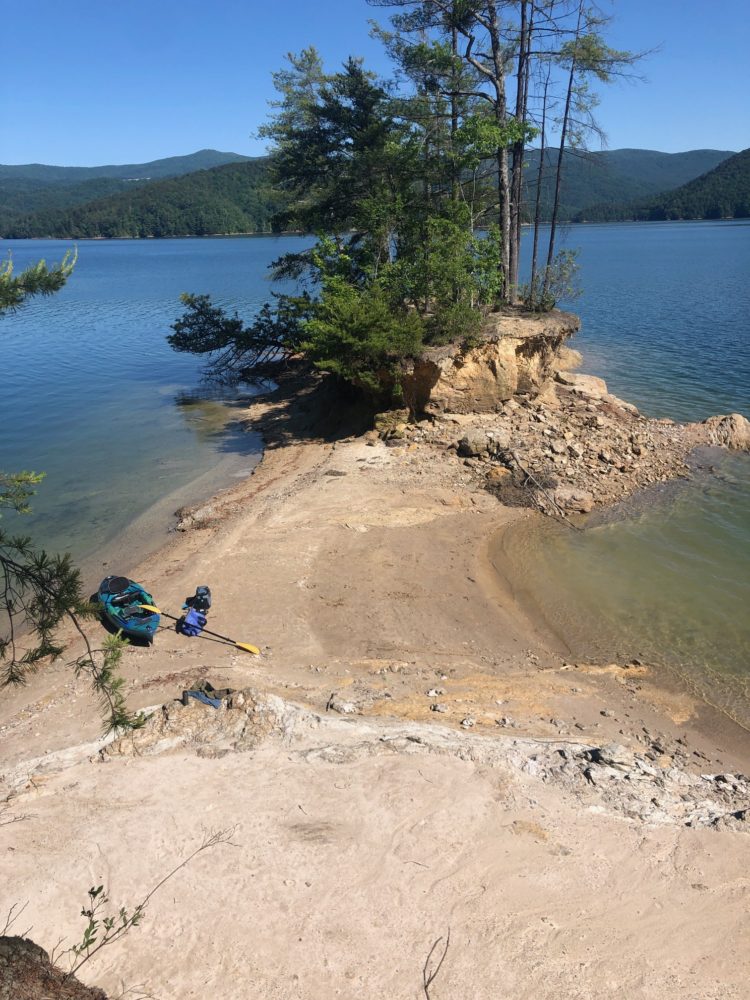 At every glance or blink, the marvel of Lake Jocassee offers observers a peek into a visual and harmonized beauty reduced to a feeling rather than an articulation of words.

Lake Jocassee,  or “Place of the Lost One” in the Cherokee language, sits high in the left collarbone of upstate South Carolina while hairs of water stretch on end back into North Carolina. 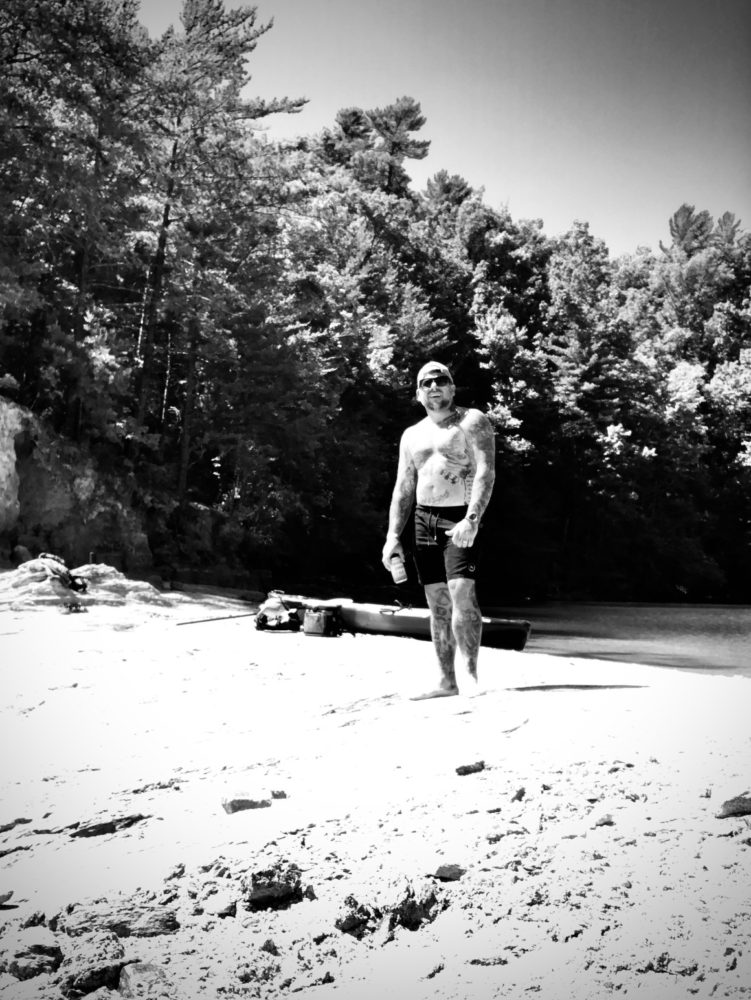 Thru-hikers using the Foothills Trail often seek the edges at places like Laurel Fork or Bad Creek by way of bridge, trail or bushwhacking to rest and to replenish.  Businessmen from Greenville and their families descend on the waters Saturday and Sunday in six figure boats lugging monogrammed totes and pastel Yeti’s filled with matte black bags of pita chips, LaCroix’s and earplugs while divers suit up and submerge from deck boats for a chance to catch a glimpse of the flooded cemetery below.

The community of Jocassee Valley resides under the waters of the lake.  Portions of the valley were flooded in 1965 then in the 1970’s by Duke Energy to create a reservoir.  Underneath these waters lie the old Girls Camp, Mount Carmel Church and Cemetery, and even a popular dive spot, home to a sunken Chinese boat! 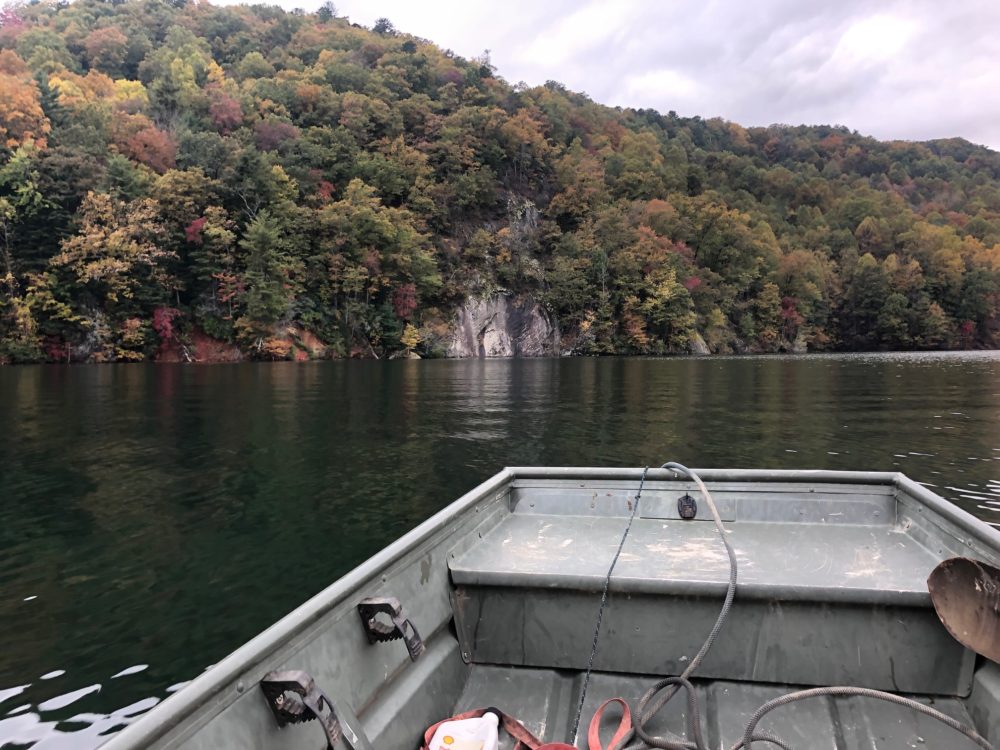 Fishermen and explorers either beat big crowds in the predawn or avoid them altogether on paddle boards or in Nitro bass boats on Tuesdays and Thursdays after a breakfast at places like Pumpkintown Grocery or Cendy’s on 11.  National Geographic listed Lake Jocassee in their feature article 50 of the World’s Last Greatest Places – the mark was not missed amongst peers like Easter Island.

On paper, there are seven waterfalls taking year-round residence along the shore plunging from origin sources and following gravity, but there are seasonal trickles that are secret to some and held in circles no bigger than five, too.  Mystery and magic wait in every turn of water and in every piece of quartz dug up by a curious toe of the sand floor it’s standing on. 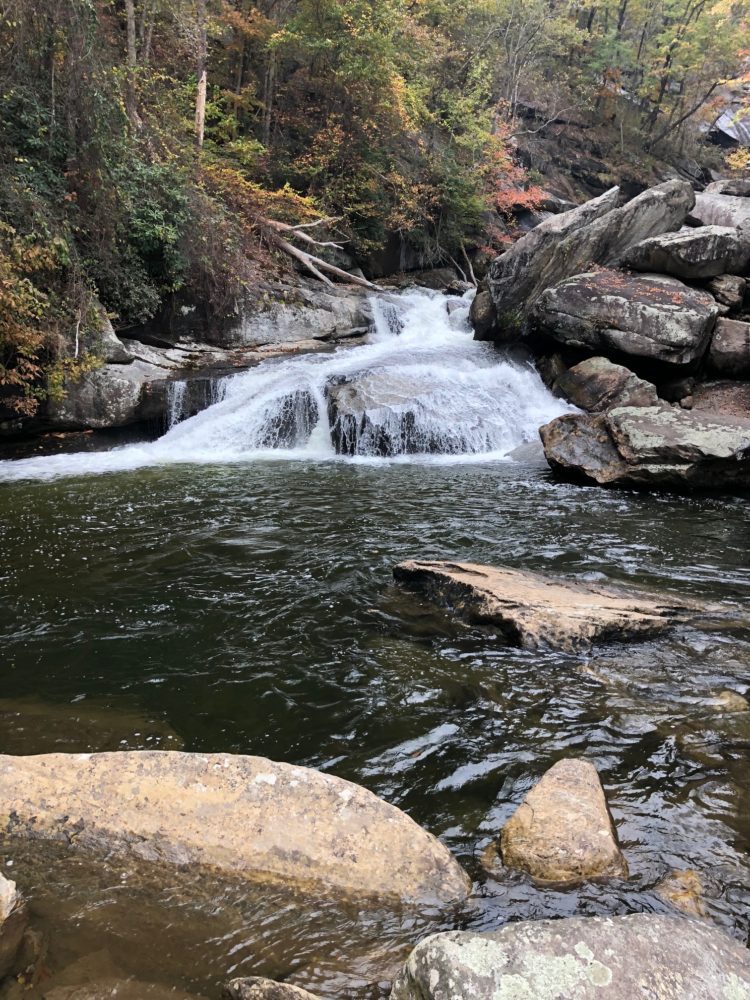 When you turn that third corner going up into the Horse Pasture River, over to the right, hangs an element-beaten rope swing on a mature and bent-up Boxelder.  The handle on that rope swing is a water logged oak limb that has been tied and retied in random knots with other lengths of multi-colored rope fashioned to it.  On around that same neck of water is a white sand beach yelling at somebody for a charcoal grill, anything attached to a rind and cut up into triangles, and a full charge on a Bluetooth speaker.  Beaches like this one make wonderful spots to stop and swim or a chance to see seasonal Appalachian fern growth (my personal favorite).  Whatever outdoor interest the mind pulls up to chase, Jocassee is sure to suit fit. 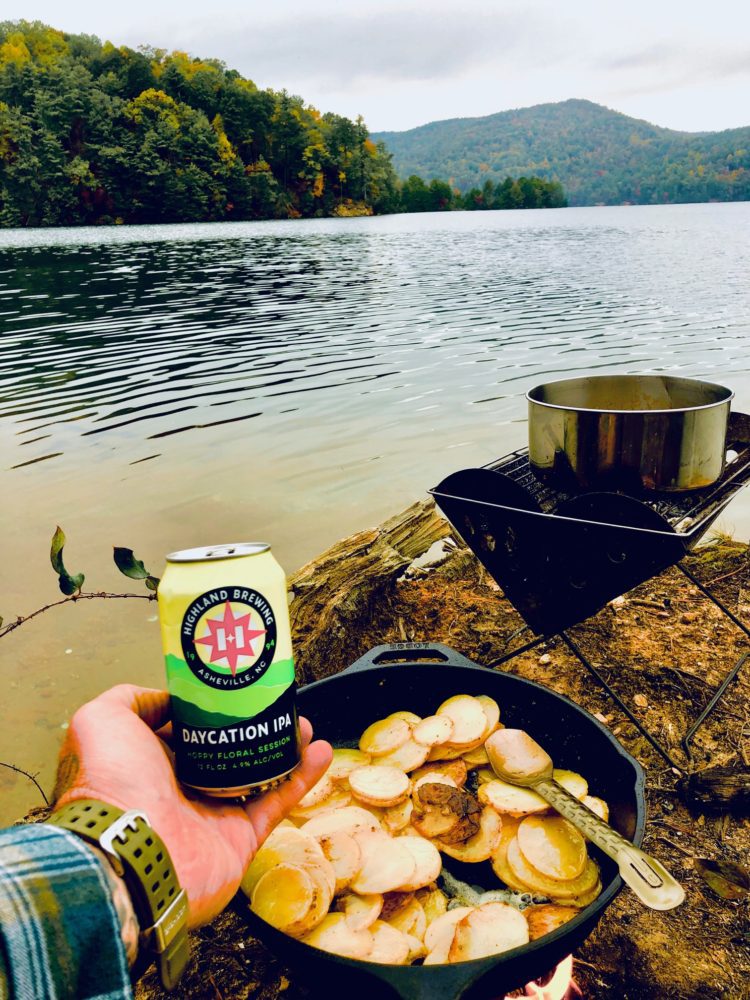 Places like Eclectic Sun Rentals and Sunrift Adventures offer rental and sale services for kayaks, paddle boards and various gear to aid the pursuit.  Jocassee Outdoor Center (formerly known as Hoyett’s to some of y’all) is a last stop to get hot dogs, boiled peanuts and stickers to decorate the beer fridge in your shop.  They also offer a rental service for pontoons and do guided tours if that’s more your thing.  It is a year round service and if you want your hair to stand on end – go in the fall.  The mismatched yellow, red and amber color schemes pushed out in leaves by the oaks, hickories and gums tower and crown at different elevations between old growth pines.  That sight alone makes light of the word awe when seen from the middle of the water on a cool and overcast day. 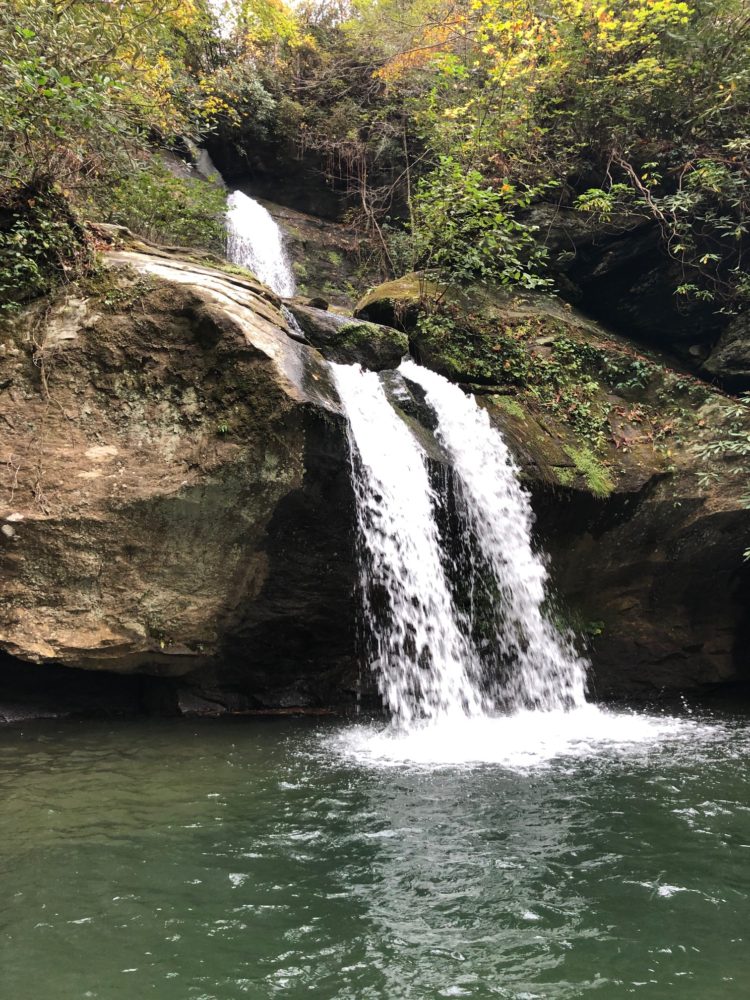 From Sundays spent cruising up to Laurel Fork eating sausage balls on the pontoon with my wife and friends, or to early Tuesday morning solo paddle board trips where I’ll take roost on some chop carved island off on a good think; Lake Jocassee is a sanctuary. 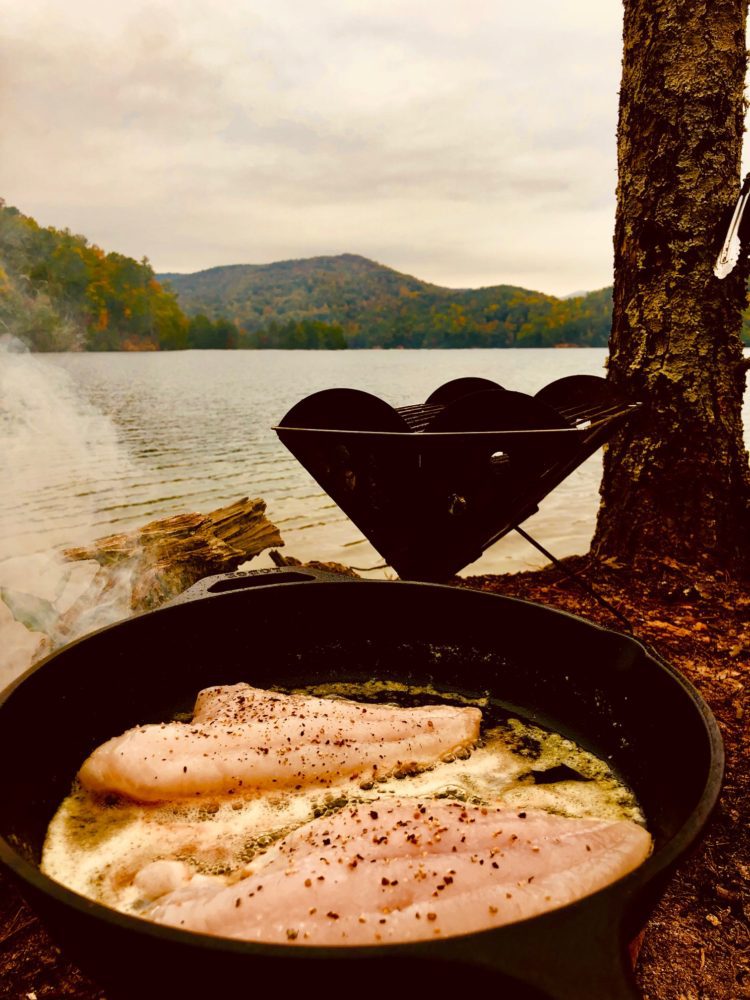 The singular word I can think of to distill the emotion I feel for the Lake Jocassee experience is the one my wife used when she put it simply – happy.  Driving home east to Marietta down Highway 11 and on through Long Shoals, one night she said, “The only thing I can really think of when we’re out there is happy, that’s it.  I just feel happy.”

And yes Koula, sometimes one word is just enough to describe something.  And maybe that one word description is taking up just a tiny piece of space inside us waiting for all that feeling to define it.  And maybe that is the point. 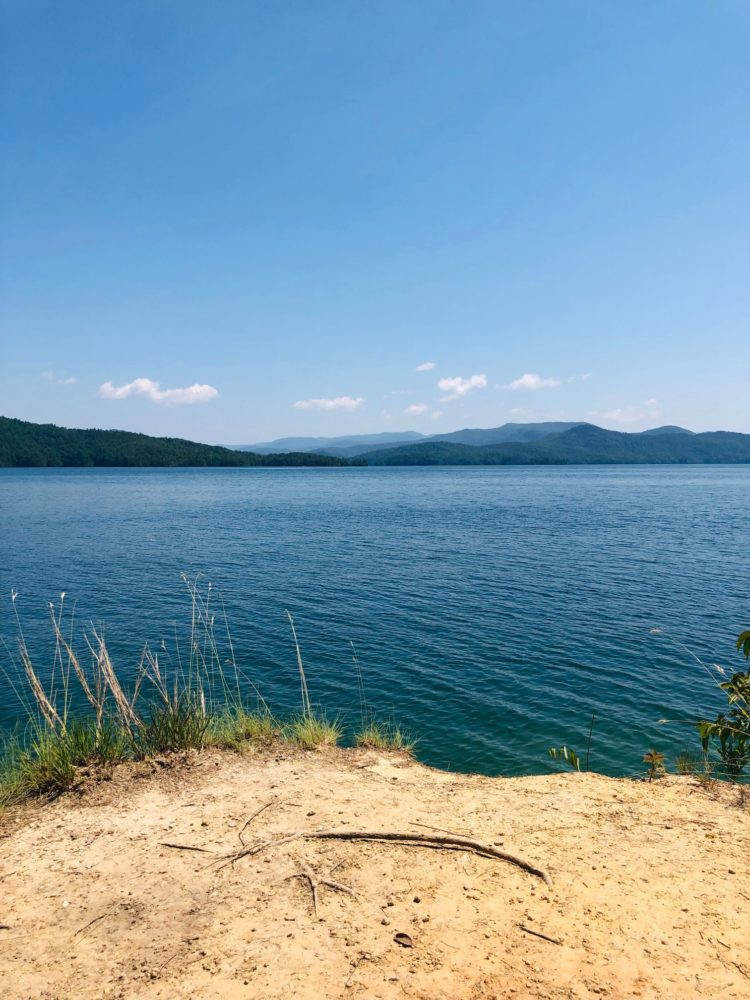