BBQ – a familiar thing around our parts here in The South.

In three regions of South Carolina alone, it is done differently. Reds in the upstate and west, mustards from Newberry to Elgin, and vinegar in the east and lowcountry are trip wires of flavor along the I-26 artery signaling what territory is what.

BBQ is the line that holds The South.  Some of us might hear, “Oh, I know you like BBQ and think you’ve got all this eating stuff figured out, but you have to … you need to … have you…?”  Yeah, there’s just about always that and none are ever wrong. Culture’s celebrities like Dave Grohl and Matty Matheson leveraged existing fame to champion the dish and publicly lift it up on platforms like Instagram and Vice TV.  Butts, shoulders, loins, and chops fill our smokers and grills around the calendar here in the upstate.

However, the coup de grâce – the whole hog BBQ – remains king when it comes to flavor and acclaim. 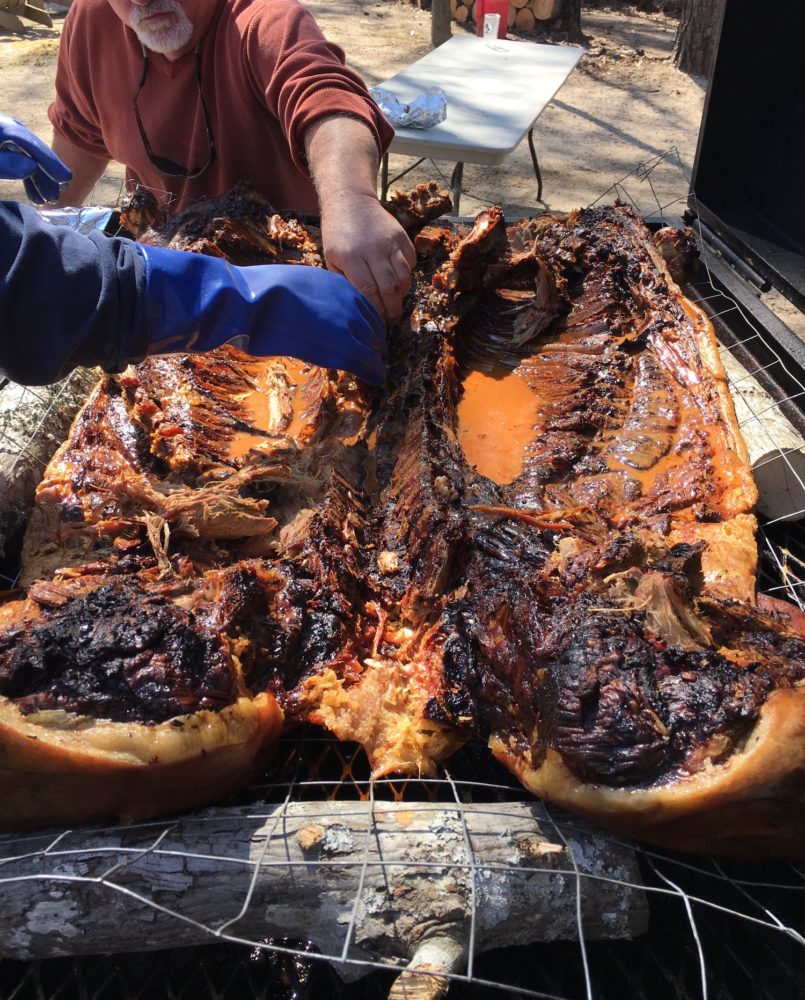 The stalwart, all-time, non-wavering, fight you to the death pride holding tradition in The South is the cooking and preparing of a whole hog or, a  BBQ.  Historically, the process starts with the slaughter and hanging to dry of the hog in a packhouse.  That might happen on a Tuesday or Wednesday morning if you’re planning to eat on a Saturday, but it might not too, depending on priorities of work.  When it does happen, brothers and friends work tirelessly in unison through prep and dressing cycles, right up to the serving of it.  They’ll carefully pass through each part of the cook from flipping to saucing, offering nothing more than a silent nod of approval or a pinch of meat toward the end (off the run of bacon) to sample.

Old timers and men with decades of “cooks” behind them are fast to let others know the process is as much a noteworthy watermark as saying the blessing hand-in-hand the night everybody gathers up to eat it.

I was fortunate enough to grow up at the end of an era seeing reverence and harmony shine through a community by union, fellowship, and simple acts of sincerity held not by pretension or exclusivity.  Nobody cared what you looked like as long as you showed up, fixed a plate, and jawed it up a while.

On the afternoon before firing a hog, men of my family, along with their friends, would peel paper covers off the round Morton’s salt canisters, exposing those metal spouts while setting them up along the pit walls.  They’d maneuver and jostle the dressed out hog from a truck bed up into a rectangular shaped block pit and on to a grate of expanded metal, skin side up.  In quiet harmony, they’d pour through boxes of that salt in rhythmic shakes covering rich, pink glows of meat pocked by long running streaks of heavy white fat.  While over all that crackling orange heat and smoke, it’d render liquid gold in time.

Crystals of that salt shook out would refract bright in the afternoon sun as it set over on the corner of the tobacco barn and field as I’d watch them; out of the way but observant.

Cracks and embers of green oak would pop and spit from the tops of a few scattered and rusted 55 gallon drums housing logs burning to fuel for the cook. “A hogs’ got to get dripping good before you flip him and it’ll tell you when it’s ready for that,” Daddy told me before cooking my first one alone.  Around 200 – 225 is an ideal temperature to let a hog run on for a full cook through the afternoon, night and following morning.  Regulation of that heat comes from square-nosed shovel fulls of raging embers.  Once towers in a swamp, now they burn to feed the ones that took them and a community.  With the hog fired and rolling on a maintained heat, kids would break loose from the cooking area to play football games, war, or just about any other adventure a swamp could summon. 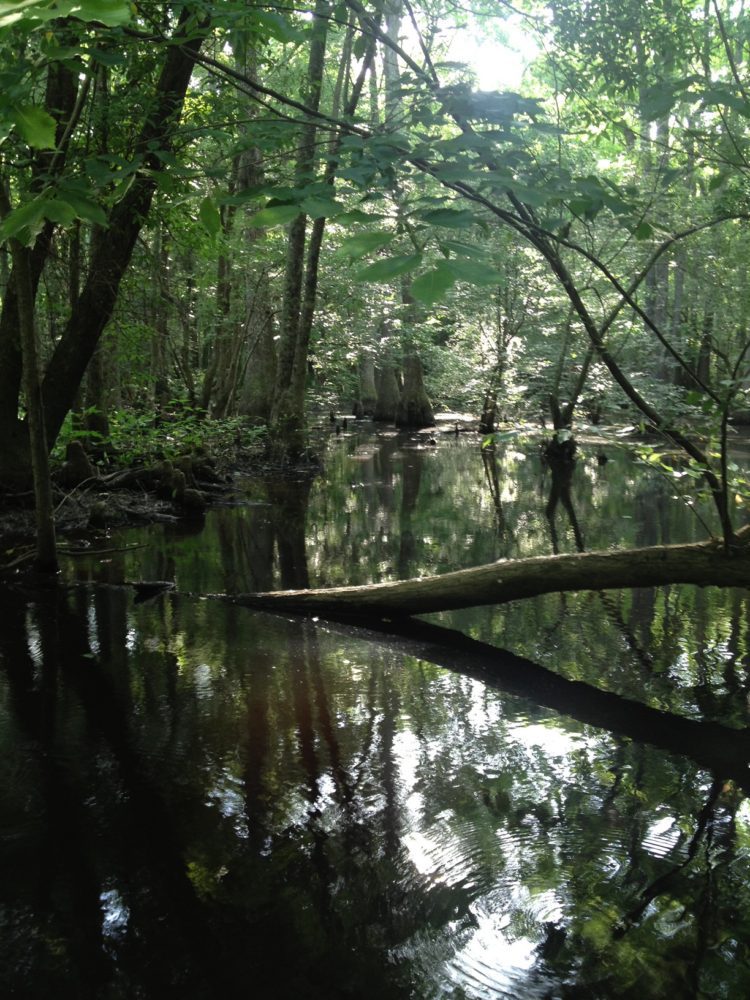 But the men – they’d sit up fellowshipping and having drinks while tending the heat and barrel of logs on through morning and the eating day.  Storytelling, business, hunting and nothing all got discussed on tailgates of 80s model GMC trucks and a half dozen or so semi-circled aluminum picnic chairs.  If the notion struck, there was always a place to go lay down up at a house or in a barn to seize a nap before the sun rose and breakfast hit the table.

The halfway highlight, breakfast.  A welcomed and lived for lull by those who braved the night to sop up drinks in bellies and a replenishing of labor lost calories.   One pause yielding nourishment to course the day on up to the eating.  Men strolled up about daylight, fixing plates and chatting while kids loafed lazily until 7:30 or 8:00 on floor pallets, tired from a night of breaking bedtime curfews and the satisfactions of nocturnal adventure. Plans for who would flip the hog with old livestock pen wire were discussed.  It usually never mattered but was brought up more to ensure availability when the crucial time came.  Last checks for sauce quantities gone over, ingredients – all casually talked about, never being written down or organized.  A true observation of wisdom, feel, know-how from trials of repetition, and life as it is lived are all present here.  Almost a trapped moment of time, a cultural quality unavailable for purchase.  Hosts for the cook provide fresh sausage, eggs, liver hash, rice, grits, toast, juice, and sometimes a pastry medley of sorts. Once they finished eating and a fresh shirt got put on, the men would return to the pit and finish the last of the cook. 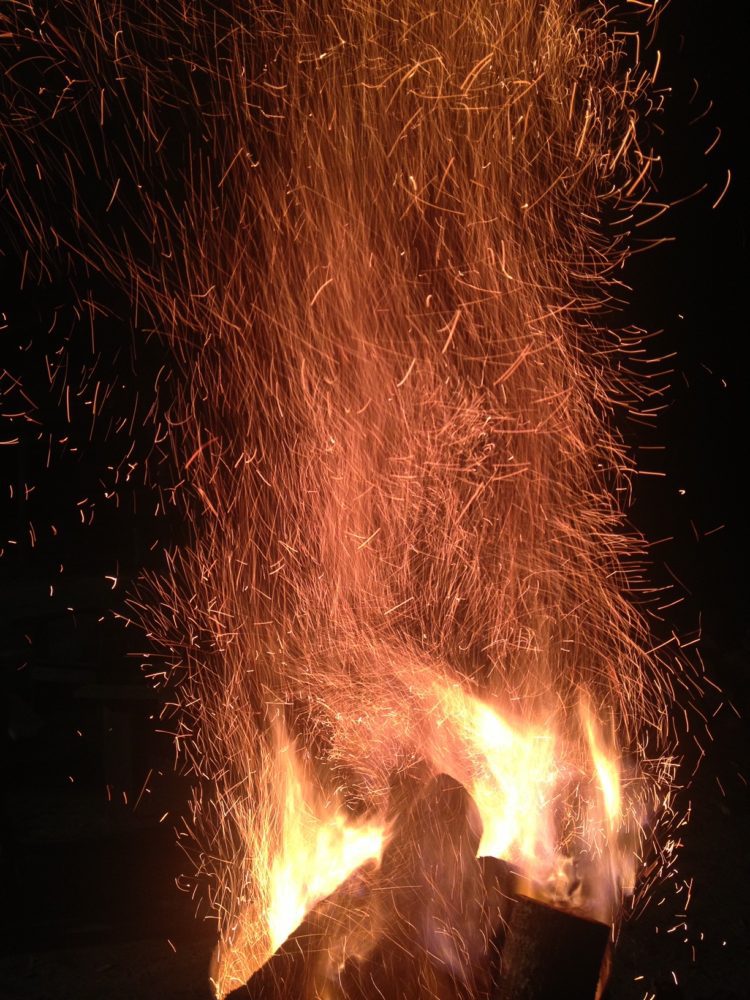 As archaic as it could appear, there is actually something to flipping and saucing a hog.  When it’s time, two pieces of cut square pen wire or hog wire (aptly named) are placed under the hog and on top of it.  It is in fact, something to watch.  Hands are protected from heat and molten grease by thick leather work gloves and grip near-perfect cut lengths of wire, bound down hard with pressure to secure it.  And just like that, with a measured and graceful balance of natural genetic motion, the hog is flipped up on its back and the meat is exposed to the sky. Once right side up, immediacy and urgency follow.  Men break the cooked shoulders, loosening and separating bone from connective tissue like some pack of quiet and wild Southern surgeons performing routine work.  Short, stubby pieces of oak log get braced underneath those shoulders giving sturdy support and residual shape to them.  Pockets of that auburn/golden smoked skin are carefully worked by hand, ensuring they don’t tear or rupture, risking sauce to leak that was ladled in.  Tongs and hands carefully string and mix long runs of tender meat and neatly separate ribs from skin. 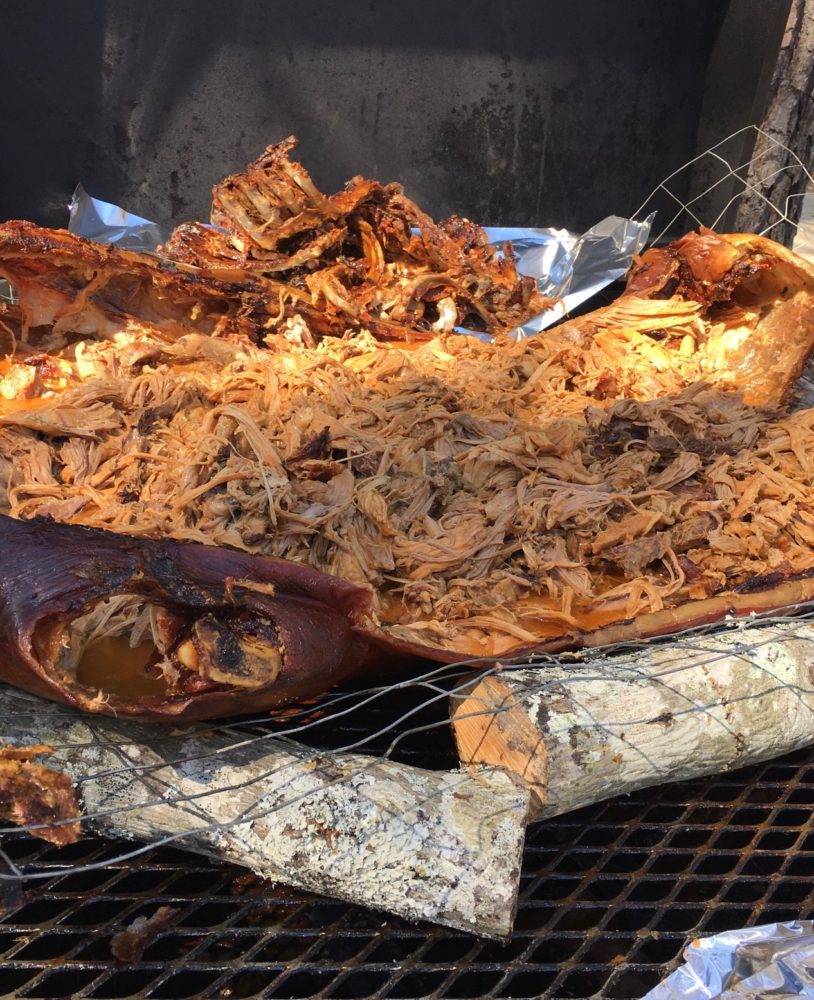 Running internally parallel to the skin, front to rear is the belly or “run of bacon”.  Sought after for flavor and the stringy texture, it is a prize pick off the pig at a BBQ, usually torn and mixed in.  Another round of fire gets brought back full circle to the hog, skin side down.  The sauce and remaining natural liquids are brought to a watched simmer then backed off to cool just a touch before serving.

There never is a certain arrival time on the day of other than after lunchtime for guests.  By then, unforeseen kinks or screwdriver turns here and there to the schedule are sorted out.  If you show up before lunchtime, you’re either going to work or be told to stay out of the way in the most gracious and genteel of ways.  It is one or it is the other and long time attendees will tell you no different.

Pig Pickin’ cakes, fruitcake cookies, chess pies, filigree patterned milk glass bowls of cold salads, pan rolls, pitchers of tea, bottles of Pepsi, and petit fours all slowly claim spots on card tables draped in throwaway paper table cloths.  Families arrive in trucks, SUVs, sedans and vans carrying those items across fields or down dirt driveways.  Hands are shaken, necks get hugged and folding chairs get set out by daddies and daughters.  There is always some sort of laissez faire commencement taking form as guests stop by to eye the hog before digging in.  Sometime after that a blessing gets said, plates get fixed and every conversation 100+ people could hold starts occurring in every occupied space inside and out. 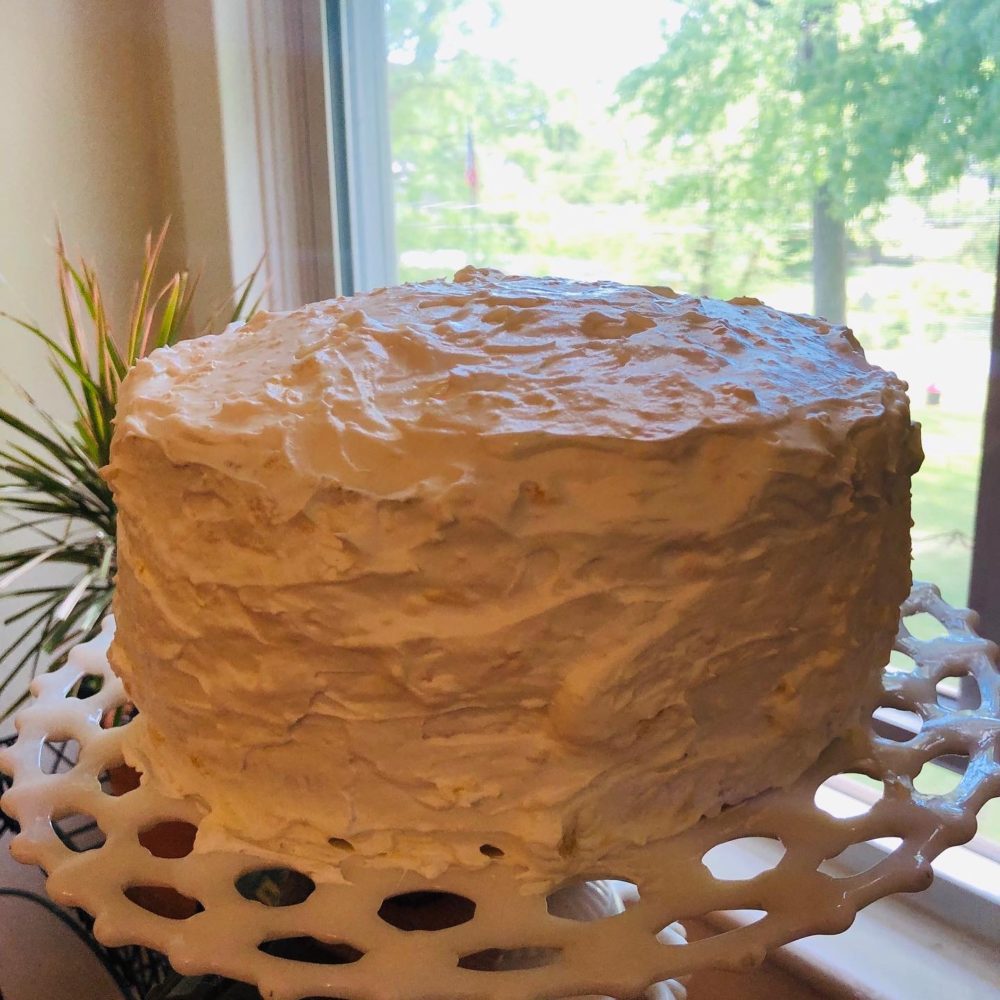 Cooking a hog can prove to be more than a celebration or some gathering to feed a community – it is a rite of passage for many.  Elliott Moss, owner, chef and James Beard Award Nominee of Asheville’s Buxton Hall BBQ fame will tell you there is no other way to eat BBQ and that’s how they choose to do business over the hill from us.  Rodney Scott, winner of the James Beard Award (Best Chef, Southeast) proves time and time again there is no substitute for whole hog BBQ at his world famous Scott’s BBQ in Charleston.

Whatever the occasion for the firing of a whole hog it is sure to offer a peek into another world.

And maybe the most important thing of all, it calls to mind a gathering where you can’t meet a stranger and all things can seem right in the world for a brief, time-stamped moment.