Every morning I step into our office, I fire up a candle or piece of incense. A lot of times, both.

The ambiance and scent strike my senses while waiting on the kettle to whistle back.

Rarely do I consider the mechanical progress of flame rolling the wheel on that lighter. Talk about leveling the playing field of time. Technology continues to absolve task from need with concepts like light switches, closed-toe shoes and grocery stores. There is something wildly pleasant about the freedom to walk inside of a well-lit and temperature controlled building with shoes on to acquire displayed, clean and ready to prepare food. Those commodities comfort me like the crispness of clean sheets on a taut bed.

Like camping, hunting or hazing myself with swims and runs, practicing the manual discipline of something like fire by friction aides in my appreciation of daily things I’d otherwise overlook.

In June of 2007, I took an instructing position in the bizarre, yet generally well- intentioned, world of Wilderness Therapy. I was doing what I could in a young brain to make sense of the extreme violence I witnessed, participated in and was left mixed up by at the end of a pretty gnarly deployment to Sadr City from 2005 to 2006. I found my way to the high desert country of Shoshone, Idaho in attempts to turn my very own, very real and impending red tide. 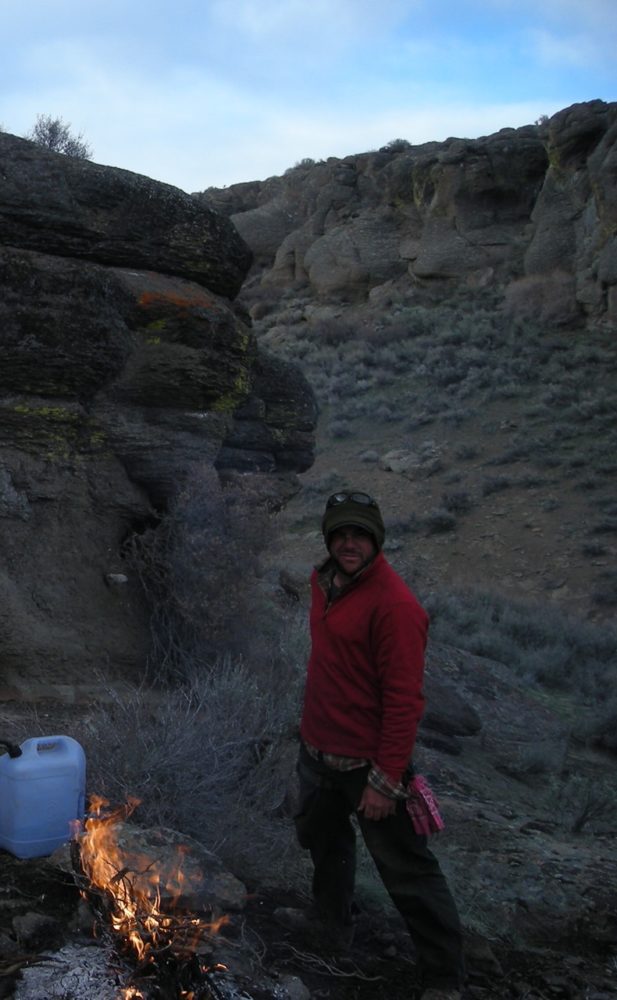 Seventeen prospective instructors were put through an abbreviated indoc; something similar to that of what students in attendance would endure. We trekked through miles of waist high sage, dodged rattlesnakes and learned the basics of primitive bushcraft from the instructors charged to pick the next crop. Around dusk each evening, we pitched shelters from ponchos for sleeping under the cotton candy colored skies in a big and open West, then journaled about the day in those shelters.

The first four days of the screener, little more was given than a one-time visual block of instruction for just about everything other than how to identify harvestable materials. A hand they played by design; allowing the circumstance of environment and pressure to tie our gray matter in knots .

Out of all the challenges presented, rendering an ember from wood became my most daunting. Achieving the desired result sounded simple enough: one piece of wood vigorously spins tight into the notch of another and a fresh glowing coal shall appear in a small nest of blackened wood fibers.

After almost two days of doing everything I could not to curse on loop under a high beating sun and send that bow drill set into an endless sea of sage and rock, I got it. 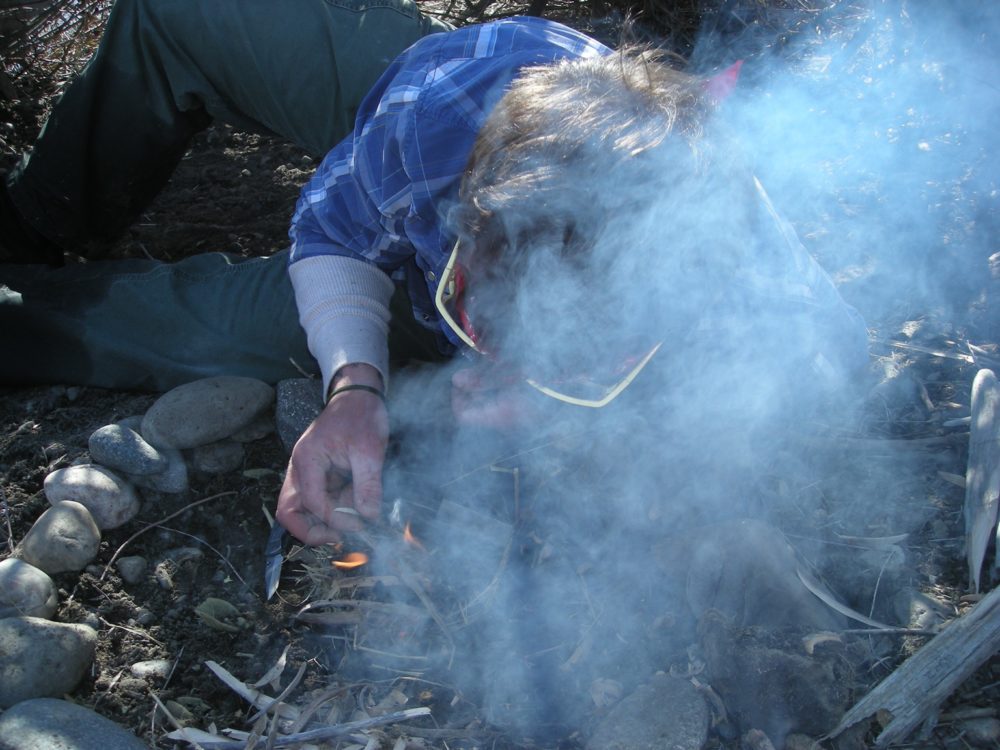 There was a connective feeling of mind-body-material harmony I found to be familiar and hit in a very natural and not that terribly distant way. The instructors were big on metaphors while under their observation and would peacefully and quietly make additional comments like, “a coal in the soul, is a coal in the hole”. The energy of that personality was strikingly odd to me at the time and out of every realm of realism I’d been around the last five years of life. But something about it stuck because I still recall it linking up to meaning in my mind somewhere.

I was hired by the end of the week and spent the next two years passing along that imparted knowledge to dozens of students and even ran a couple selections for future instructors myself before leaving in 2009. Since, I have used those skills to revisit the simple and balanced presence out here in all this fast. Unfortunately, there’s no sage here in North Greenville County, but last week I called up my lifelong friend and expert woodsman, Carson Keitt, to get his opinion and some favorite go-tos for our area. We talked that afternoon while I had my sets out piddling and we both decided on Cedar and Poplar.

When constructing a bow drill set, comfort and efficiency should be considered. 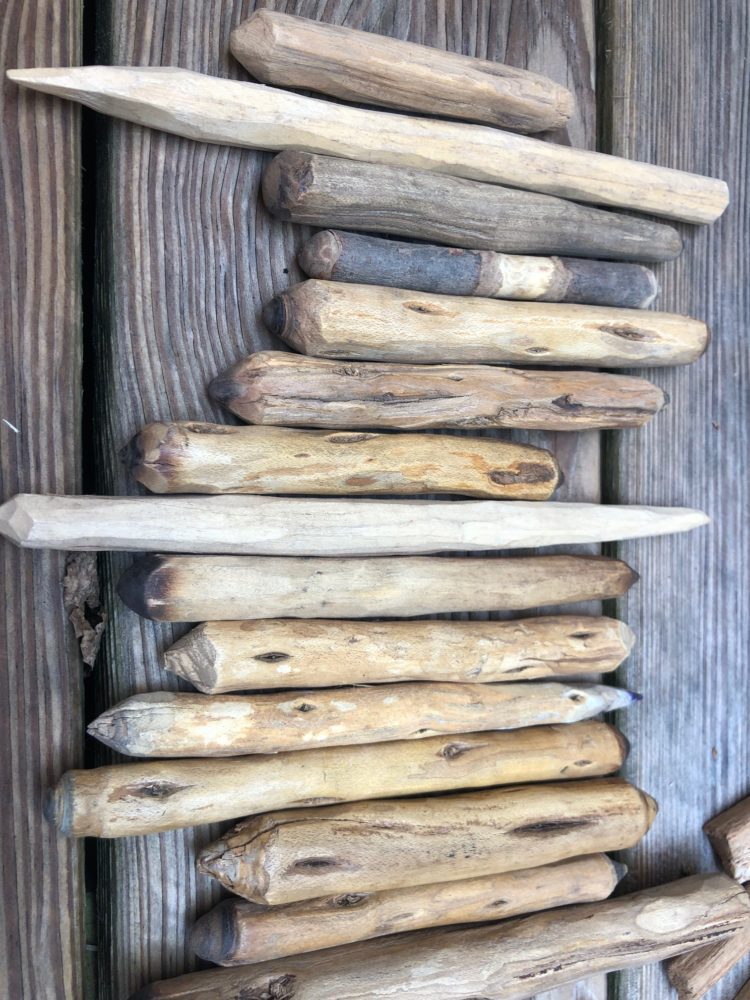 Starting with a bow, users should select a green branch (of any species) about 1”-2” in diameter with a length spanning from the tip of the middle finger to the inside of the armpit. A slight curve is preferable. A piece of 550 cord or shoe lace can be hitched hand tight to create the “bow string” about an inch from either end.

When selecting a board, a flat, dried piece of cedar roughly 3”- 4” in width and about a foot in length is ideal. Logs can be split and shaped with heavy fixed blade knives to achieve this. Prepping the fire board requires little more than using the tip of a knife or pointed rock to make a small indention half the width of a chosen spindle.

A slightly flexible, and straight branch of Poplar about 1” in diameter and 8”-12” in length is the best choice for spindles.

Finally, users should select a comfortable hand socket for bringing the board and the spindle together with down pressure. Animal bones, small rocks with slight depressions, and even other pieces of wood can be used for these. Just make sure if you’re using other woods that earwax (yes), facial oils or synthetic barriers between the two is in place to ensure a coal doesn’t pop up top.

Once the set is complete, you’re free to try. 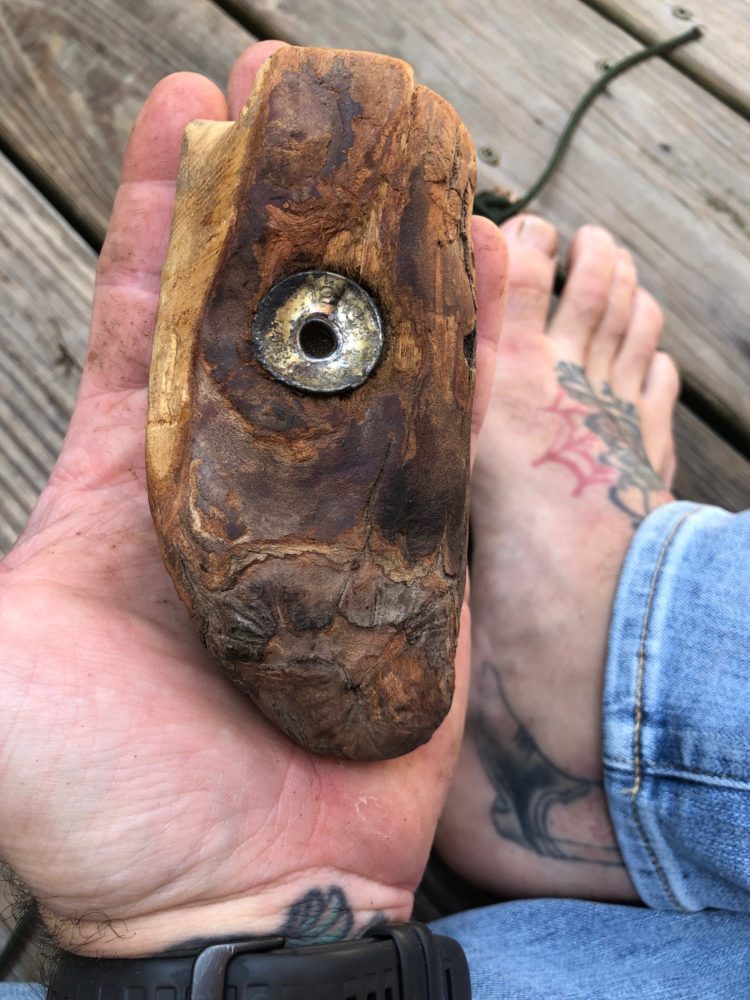 Secure the spindle in the bow by placing it on the string and twisting it over once. This will increase string tension. Next, place the point of the spindle into the small knife divot on the fire board. With a non-dominant hand, secure the top of the spindle in a vertical position at the top of the hand socket, applying a heavy amount of down pressure. Now, slowly move the bow back and forth until the momentum of control builds and watch for smoke. Stop after about thirty seconds of consecutive drilling, then cut a small “pizza shaped” notch at the edge of the board, halfway into the spindle indention. This will allow passage for the coal and create an oxygen source along with the blackened fibers building beneath the wedge cut. Repeat the drilling process and watch for heavy, billowing smoke. 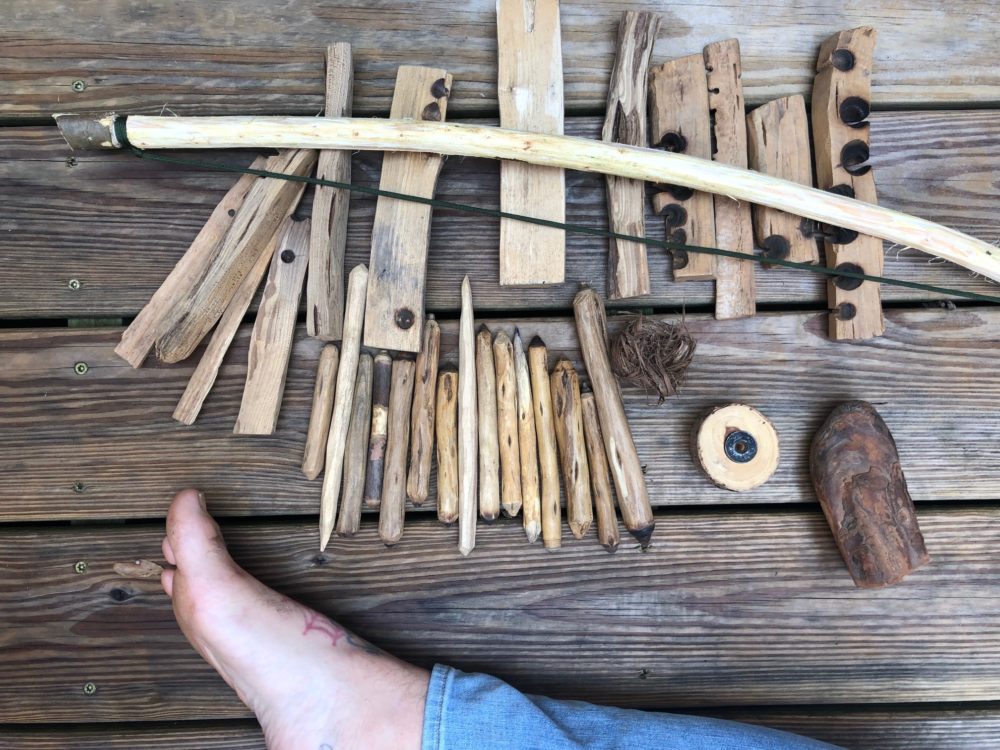 To capture the coal, I’ve found anything from garbage to green leaves placed beneath the wedge work well enough for transferring the coal to a bundle of tinder. In our area, Cedar bark works great for bundles. Strip a few feet and wrap it into something resembling a bird’s nest around the four fingers of a chosen hand, then tail a knot in the base. Once the coal is in, blow slow deliberate breaths into the bundle, gently squeezing it to prime enough oxygen in there to create a flame and roll a source.

Not only are skills like bow drilling life saving in a variety of ways, the spark is a passage in time unmoved by it. It is the same as it ever was and there is something beautiful in that thought, something pure.

I don’t know much about meditation, but in the practice of primitive skills I want to befriend it and find myself looking toward a center.